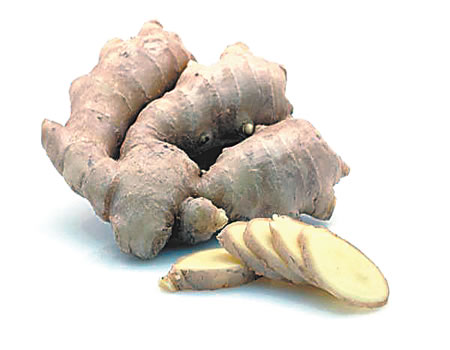 It’s no secret that having a stuffy nose and a chest filled with mucus can make it hard to go about your daily life. Sometimes, it can even be hard to breathe. Fortunately, there are ways to free up the airways. Besides over-the-counter (OTC) medications, ginger is an alternative remedy that may help ease the congestion.

In a new study, researchers found no significant difference in the efficacy of ginger extract in relieving symptoms of allergic rhinitis such as stuffy nose when compared with loratadine, a commonly-used non-sedating antihistamine. It is an over-the-counter medication.

They found that taking ginger extract continuously for six weeks can relieve the symptoms of allergic rhinitis and improve the quality of life for patients.

Allergic rhinitis, also known as hay fever, is a type of inflammation in the nose which occurs when the immune system overreacts to allergens in the air. Signs and symptoms include a runny or stuffy nose, sneezing, red, itchy, and watery eyes, and swelling around the eyes. The fluid from the nose is usually clear.

Allergic rhinitis poses a significant global health problem. It is the most common form of non-infectious rhinitis, affecting 10 to 30 per cent of all adults and up to 40 per cent of children. From epidemiological studies, the worldwide incidence of allergic rhinitis continue to increase.

Management of allergic rhinitis has usually focused on suppressing these inflammatory reactions and the main medications include antihistamines. Medications like antihistamines have such side effects as drowsiness, dry mouth, rash or fatigue. For these reasons, it is essential to search for a better-tolerated alternative, especially from herbs.

Ginger is widely used as a spice throughout the world. In Thai traditional medicine, it has been used as a part of herbal remedies for treating cold, constipation, sleeplessness and relieving flatulence. In other traditions such as Indian and Chinese medicine, ginger has been used for several disorders such as asthma, nausea and arthritis.

Researchers at Thammasat University Hospital, Pathumthani, Thailand had investigated the efficacy and safety of ginger extract in comparison with loratadine for treating allergic rhinitis patients in a randomized controlled trial that took place. It was in the April edition of the journal, BMC Complementary Medicine and Therapies.

The itching, runny nose and nasal congestion had decreased in the third week. The sneezing symptom, in the ginger-treated groups, showed significant reduction in week 6 but loratadine treatment had reduced sneezing in three weeks.

Also, the ginger extract caused less side effects, especially drowsiness, fatigue, dizziness and constipation and as such it could be used as alternative treatment for patients with allergic rhinitis.

Eighty patients from the Department of Ear Nose and Throat, Thammasat University Hospital between 18 and 70 years old were chosen. The patients had a clinical history of allergic rhinitis symptoms (itching, nasal congestion, watery nasal discharge or runny nose and sneezing) and were diagnosed by doctor with a moderate allergic rhinitis.

They had stopped taking antihistamine or intranasal steroids for one week before trial and did not have history of the following disease: heart disease, kidney disease, liver disease, epilepsy, high blood pressure and severe asthma.

The participants in the study were instructed about the same appearance of treatment and to take two capsules two times daily for six weeks; the experimental group received ginger extract capsules, or the control group received loratadine. The safety is measured by using blood analysis, measuring blood pressure and questionnaire.

All of them were followed up at third and sixth week for evaluating the efficacy, safety, and patient compliance. Overall, the intensity of the allergic rhinitis in the study participants was assessed based on their nose symptoms, including runny nose, itchy nose, nasal congestion and sneezing.

According to them, “This study showed that ginger extract could reduce allergic rhinitis symptoms and is safe to use with very mild gastrointestinal side effect such as eructation. Ginger extract is better than loratadine in causing less drowsiness, fatigue, dizziness and constipation.”

Previously, clinical trials have examined the clinical effectiveness of ginger for conditions such as motion sickness, nausea and vomiting, osteoarthritis and diabetes mellitus. However, there has been no clinical report of ginger extract relieving symptoms in patients with allergic rhinitis.