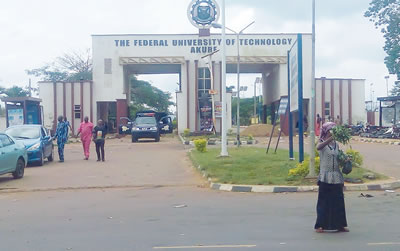 Members of the  Non-Academic Staff Union of Federal University of Technology, Akure (FUTA) on Wednesday, kicked against the expulsion of its chairman, Mr Bayo Aladerotohun and members of the branch executives.

Members of the union in  FUTA, who converged at the school described the action of the  Secretary-General of NASU, Mr Peter Adeyemi, after its meeting as an effort in futility, saying the suspension and expulsion cannot hold.

Speaking to newsmen after the meeting, the embattled Chairman, Mr Bayo Aladerotohun, explained that the union had instituted an injunction before an Industrial Court, to restrain the National Executive of the union and the Secretary-General from taking any action pending the determination of the suit before the court.

He described the action as a contempt of court for violating and taking action over a case before a competent Court of law.

Aladerotohun said “the purported expulsion at the meeting of November 6, 2019, in Ilorin is a nullity and does not hold water in the face of the law, because a motion for an injunction had already predated that meeting before the decision was taken.

“The provision of the NASU constitution is very clear on this where rules 9,  states that NASU lacks the power to either suspend, dissolve or expel a member of the executive or secretaries of any branches.

“The NEC meeting that took place on the 7th of November 2019 is incongruent to the constitution of the union because it is the NEC of people that have just been voted in the NASU election all over the branches in the country.

“They have not been inaugurated or take an oath of office, they are to be inaugurated during the union quadrennial conference fixed for 5th and 6th December 2019, of which a court injunction had been filed to restrain them from holding that meeting and the rules conference.

“How can NEC of NASU ratify a matter that is pending before a competent court of law, the National Industrial Court”

He, however, stated that the order and suspension of the  FUTA Executive by Adeyemi did not affect him or any of his Executive until the determination of the suit, saying FUTA NASU remains a member of the union.

He alleged Adeyemi of running the union as a one-man business whose authority cannot be challenged, noting that he had been at the helms of affairs for too long.

He stated that corruption, impunity, thrive in the union and said “we are using this medium to appeal to well-meaning Nigerians to appeal and prevail on Mr Peter Adeyemi, the General Secretary of NASU  to thread the path of peace and obey the law, and to respect the sanctity of the court”

Aladerotohun, the Branch Chairman of FUTA and 11 others were expelled by the union over alleged “anti-union activities” during an Emergency Meeting of Universities and Inter-University Centres Trade Group Council at the University of Ilorin.