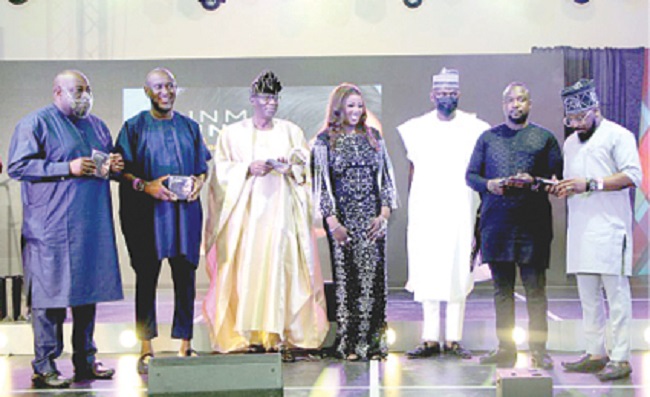 Celebrated engineer and musician and record label owner, Funmilayo Waheed-Adekojo, popularly known as Funmi Ayinke, last Sunday, released her debut album ‘The Journey’ amidst pomp and fanfare at a special event graced by the creme of society in Lagos. The event also witnessed performances from Teni, Jaywon, Tdot, among others.

Following the successful release of her debut single entitled, ‘It’s Our Time’, the inspirational writer and soulful singer, released her 15-track album which features talented and multiple award-winning acts such as Tunde ‘TDot’ of Styl Plus, popular comic act-cum-singer, Klint D Drunk, Magnito, and legendary singer, Chief Ebenezer Obey, among others.

Speaking on her album release, the multi-talented Funmi Ayinke, also the founder of Funmi Ayinke records and Funmi Ayinke Humanity Foundation (FHF), said the body of work was inspired by her desire to pass a strong message of hope and motivation to her listeners.

“I decided on the album after taking a deep reflection on how I can impact the larger society asides from what I do at the FunmiAyinke Humanity Foundation (FHF). Then the inspiration to sing hit me. It was at the time that I decided to write the songs before hitting the studios to pour out my soul on the songs. The album is a mix of inspirational and soulful soft music that was well produced and mastered to delight my listeners,” she said.

On her choice of features on the album, Funmi Ayinke said, “I grew up listening to Chief Ebenezer Obey whose career has lasted multiple decades. It was a dream come through having him on a record that I intend to use to inspire a wider audience. I also featured established characters such as veteran gospel singers: Funmi Aragbaye, TDot, Magnito, and Klint D Drunk on the album.”

The Journey album features well-written and powerful compositions that are strong sources of motivation and inspiration to listeners, provide the needed zest to those in moments of darkness and hope for the down cast. All the 15 songs were carefully composed and written with the hope that they heal the mind, body, and soul of everyone that listens.

She started doing music dedicatedly last year, having established herself as a respected motivational speaker, writer, and public figure who is compassionate about the lives of others, backed by a desire to use her gift for humanity.

According to her, she aims to effect positive changes where ever she finds herself, especially on the aspect of national development and reformation of lives, most especially among the Nigerian youths.