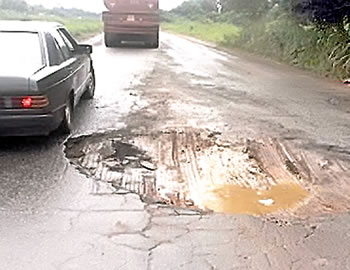 The FRSC Zonal Commanding Officer in charge of Jos Zone, Mr Oludare Fadogba, has decried the deplorable state of roads within the zone.

Fadogba told the News Agency of Nigeria (NAN) on Friday in Jos that the precarious condition of the roads poses serious challenge to commuters.

NAN reports that the Jos Zone comprises of Plateau, Benue and Nasarawa states.

He said most of the highways within the zone had potholes, dangerous bends and many other obstacles that could lead to accidents and loss of lives.

“Driving on Nigerian roads is no longer enjoyable and pleasurable as most of these roads have become what Fela Anikulapo described as suffering and smiling.

“The roads are no longer interesting for tourism, inter-state trade promotion and other activities that can improve the revenue profile of the nation because they have become death traps.

“A recent audit report we carried out showed that between Forest-Hawan Kibo and Mararaba Jama’a, a distance of 76 kilometres, there are 1,762 potholes.

“There are also 25 dangerous bends, five black spots and so many broken vehicles abandoned on the roads,’’ he said.

He called on the Federal Ministry of Works to ensure that these roads were urgently given a face lift.

Fadogba said this would go a long way in reducing to the barest minimum the rate of deaths and loss of properties on the highways.

He called on state governments within the zone to partner with the commission by supporting it with logistics to enable it carry out its duty of ensuring safety on the highways.

The commander urged motorists to maintain absolute discipline while plying the highways, adding that the task of ensuring safety should be a collective responsibility of all Nigerians.

Niger state govt to embark on commissioning of projects, roads