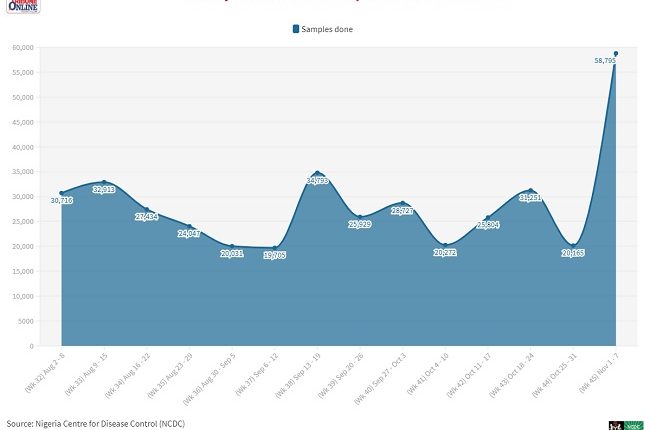 Last week marked the 45th week since the pandemic began in Nigeria in February. A total of 686,395 samples have been tested so far out of which 63,790 cases were confirmed, 59,884 recoveries and 1,154 deaths were recorded.

Data sourced from the Nigeria Centre for Disease Control (NCDC) showed that a total of 58,795  samples were collected for testing compared to the 20,165 tested the previous week.

Currently, there are only 2,752 patients in various isolation centres across the country.

Tribune Online analysis further showed that the COVID-19 death rate reduced last week. 10 persons died from COVID-19 complications, according to the data provided by the NCDC.

Also, 1,209 people recovered and were discharged last week; this shows a reduction when compared to the 1,390 persons of the previous week.

The Presidential Task Force on the COVID-19 pandemic, during the last briefing, expressed concern over air passengers returning from abroad who failed to present themselves for Polymerase Chain Reaction (PCR) test as required by COVID-19 guidelines.

The Chairman of the Taskforce, Mr Boss Mustapha, said statistics emerging from records show that only one out of three passengers have shown up for the in-country test.

“The PTF similarly announced sanctions as a consequence of any infraction. Having observed serious non-compliance to the level of 65 per cent, the need has arisen to activate the sanctions which include the suspension of the passports of such defaulting individuals for a period of six months minimum,” he said.

On Sunday, 111 new cases of COVID-19 were reported in the country, bringing the total number of confirmed cases to 62,964.

On Monday, 72 new cases of the pandemic were reported in the country, taking the total to 63,036.

On Wednesday, 155 new cases of COVID-19 were reported in the country.

On Thursday, 180 new cases were reported in Nigeria.

On Friday, 223 new cases of the pandemic were recorded.

On Saturday, 59 new cases were reported in Nigeria, bringing the total number of confirmed cases to 63,790.