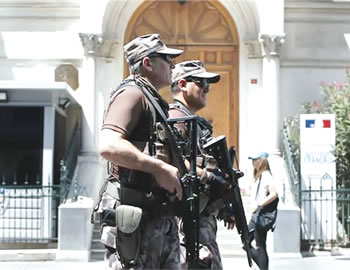 France has temporarily shut down its embassy in the Turkish capital Ankara and its consulate in Istanbul, citing security reasons.

“The Embassy of France in Ankara, as well as the Consulate-General in Istanbul, will be closed from Wednesday July 13, 1pm (10:00 GMT), until further notice,” the embassy said in a statement on Wednesday.

Al Jezzeera reported that the announcement came a day after France scrapped Bastille Day – or French National Day – receptions at these missions on security grounds.

French consul to Istanbul Muriel Domenach wrote on Twitter the events in all three cities had been cancelled “for security reasons”, and that France was in touch with the Turkish authorities.

The Istanbul consulate had also sent an email message to French citizens in Turkey saying there had been “concurring information of a serious threat against the organisation of the July 14 celebrations in Turkey”.

It said the decision had been taken in coordination with the Turkish authorities.

Turkey is on a high security alert following the June 28 attack on Istanbul’s main airport, which killed 47 people. The attack was blamed on the Islamic State of Iraq and the Levant (ISIL, also known as ISIS).

At least 37 suspects have been placed under arrest over suspicion of involvement in the attacks. Of these, 15 are Turks and 22 foreigners, according to state media.

Authorities have said a number of citizens of ex-Soviet republics are among the suspects currently detained, raising concerns over the threat to Turkey from the citizens of Central Asia and the Northern Caucasus. There were also suspects from the Middle East among the ones detained.

The bombing at Ataturk International Airport in Istanbul followed a spate of attacks across the country this year blamed on ISIL and Kurdish fighters.

Several foreign missions in Turkey, including the embassies and consulates of Germany and the US, were shut down for short periods this year owing to a security threat.