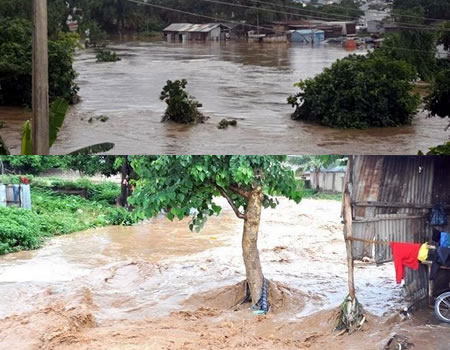 WORRIED by the threat of flood in many communities in the state, the National Youth Council of Nigeria (NYCN), in Kogi State has mobilised no fewer than 1000 youths to work in the nine local government areas that are prone to flooding.

The local government area prone to flooding in the state are Kogi, Lokoja, Omala, Igalamela-Odolu, Kabba/Bunu, Ajaokuta, Ibaji, Bassa and

The chairman of the NYCN, Kogi State, Nihi Oladele, on Sunday, said the youths would be selected through the local government chapters of the council to work with the State Emergency Maintenance Agency (SEMA) and NEMA

He said, “The idea is to raise volunteers through the local government chapters of the council who we expect to work with NEMA and the state Ministry of Environment in carrying out grassroot sensitization and environmental sanitation, this includes clearing of blocked drainages to allow free flow of water, creating alternative routes for water to flow easily, clearing of bushes (where necessary), and other tasks that may be deemed necessary by the ministry.

“It could be recalled that the National Youth Council of Nigeria partners with the State Ministry of Environment in carrying out advocacy and the monthly environmental sanitation exercise. This is because as a council, we believe in the saying that ‘Health is Wealth’, and a healthy life can only be guaranteed through a clean and safe environment.

“It is our belief that this set of youths that we are going to put together will complement the effort of NEMA and the State Ministry of Environment by taking the advocacy to the grassroot and also helping the communities to do the needful. We hope that the Ministry will provide them with the necessary tools to carry out this job.

“We are enthusiastic that this little effort of the Youth Council, will help avert the imminent flooding or worst still, mitigate the suffering of our people as we endure this trying times.”

Oladele however appealed to every segment of the state to join in the advocacy and render assistance to those that might be affected by flood.

He also commended NEMA, SEMA and the state ministry of environment for their efforts in contending with the flooding problem ravaging the state.