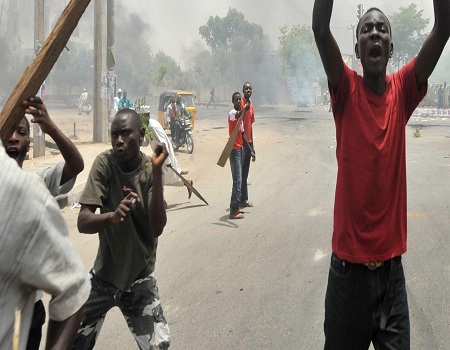 Not fewer than five persons have been reportedly killed while several others were injured following election violence in parts of Bauchi metropolis as political thugs popularly called ‘Sara-Suka’ went on rampage attacking innocent residents.

Reports have it that the political thugs who went on a rampage between Thursday and Tuesday morning, attacked and killed innocent residents injuring several others also in the process in protest of the conduct of the recent gubernatorial and State Assembly elections.

The thugs were reported to have unleashed terror on residents of Ran Road, Gombe Road, Abujan-Kwata,  Bakaro, Doya and other areas of the metropolis demanding money as ransom from innocent people and dispossessing them of their valuables including handsets and other things in lieu of money.

In the process rival groups attacked each other mostly at night hours leading to the loss of lives and destruction of properties of innocent residents.

While confirming the incidence in a telephone interview with newsmen, the Police Public Relations Officer (PPRO),  Bauchi State Police Command, DSP Kamal Datti Abubakar, said that as far as the Command was concerned only one person was killed in the incident disclosing that 9 suspects have so far been arrested in connection to the incidence.

He said: “Yesterday  (Monday),  around 9 pm, we received a report that some thugs popularly known as Sara- Suka, went on a rampage in Bauchi metropolis. They invaded the Doya, Bakaro and Abuja Kwata areas, among others within the Bauchi metropolis. We mobilized our patrol teams and moved in immediately into the area and they were able to contain the situation and made some arrest.”

The PPRO, added that: “We received a similar report yesterday around 11 am, that they came out again fighting each other, attacking and terrorizing members of the public,  destroying and stealing their properties at the same time. Between yesterday and this time today that I am talking to you, we arrested 9 suspects in connection with the incident.”

Asked to state the exact number of people so far killed,  he said: “I can confirm to you at this moment that one person has been confirmed dead while several others were injured and receiving treatment in the hospital”.

Datti Abubakar called on members of the public to be more vigilant and report all suspicious activities to security agents for immediate action and assured that security agents are working round the clock to ensure that law-abiding citizens and their properties are adequately protected.

“What we need from them is their cooperation, these people live within their localities, when we deploy our patrol teams into their areas, they should tell them who these people are. They should not see the patrol team as been there to intimidate them but to protect them”, he appealed.