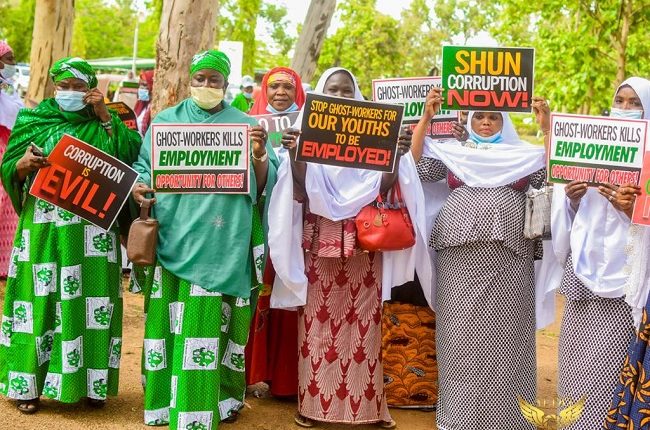 Bauchi State government has been advised to as a matter of urgency take steps that will expose ghost workers in the state service in order to stem corruption and other sharp practices militating against efficiency in service.

The call was made by the State chapter of the National Council of Women Society (NCWS) which lamented the proliferation of ghost workers on the payroll of the state urging that stringent measures must be taken in order to avoid wasting its lean resources on the ghost workers.

State chairperson of the society, Barrister Shafa’u Ladan made the lamentation over the weekend during a rally organised by the group in collaboration with the office of the State First Lady, Hajiya Aisha Bala Mohammed, as part of activities marking the 2020 edition of the African anti-corruption day.

She said that it is an act of corruption for some civil servants to be collecting multiple salaries when teeming other citizens are jobless and are finding it pretty difficult to make ends meet while the government is crying of a lean purse.

She said: “It is really disheartening and sad to be faced with challenges associated with ghosts workers phenomenon. How can someone be collecting multiple salaries at the detriment of so many citizens of the state? Even with the lean resources of government, payroll kept swelling up due to proliferation of ghosts workers.”

The NCWS Chairperson added that “There are so many qualified citizens of Bauchi State that need to be employed by the state government, but a large chunk of the state’s funds goes into paying these unscrupulous elements in the form of ghost workers. Until this ugly challenge is mitigated, it is not likely that the government may lift an embargo on employment.”

Shafa’u Ladan then appealed to women groups in the state to continue to advocate for a society that is free of corruption and raise their voices against gender-based violence in any form.

She stressed that “Such campaigns will go a long way in drumming up support for efficiency, transparency and accountability in governance. It is a clarion call that must be answered by all, to ensure a just society that would be the pride of future generations.”

While speaking during the solidarity march, the chairperson of NAWOJ Bauchi State chapter, Mrs Bulak Afsa said that Women Journalists in the state will also renew their efforts in carrying out sustained campaigns against corruption through their reportage.

Bulak Afsa added that “Such campaigns will go a long way in drumming up support for efficiency, transparency and accountability in governance. It is a clarion call that must be answered by all, to ensure a just society that would be the pride of future generations.”