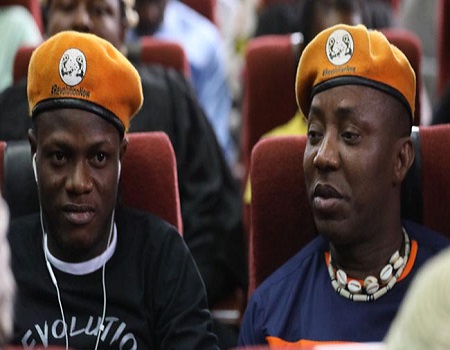 Omoyele Sowore, Convener, #RevolutionNow, and his co-defendant, Olawale Bakare were, on Thursday, arraigned by the Federal Government before Justice Ijeoma Ojukwu on fresh charges.

Sowore and Bakare, however, pleaded not guilty to the amended two-count charge brought against them by the office of the Attorney General for the Federation (AGF).

At the resumed hearing, Justice Ojukwu struck out the 7-count charge earlier filed against the defendants, following an application by the AGF counsel, Aminu Aliyu, asking for the substitution of the previous charges with the new ones.

Alilu also brought forward the evidence of payment of the N200, 000 fine imposed on the prosecution by the court.

However, when the AGF lawyer told the court that he was in the court with the witnesses to give evidence in the trial, the defence counsel, Abdul Mahmud, raised an objection on the ground that the full statement of the witnesses was yet to be served on them.

Mahmud argued that what prosecution served on them was the summary statement of the four witnesses.

Mahmud stated that the video clips of the witnesses’ statement would be needed to prepare for defence.

He submitted that fundamental rights of the accused must be respected and must be given the opportunity to see those evidence.

The lawyer insisted that since the prosecution had the witnesses’ evidence in tape, he demanded that the tape be played in the open court.

The judge, then, asked for a copy of the witness’ statement.

After perusing the summary statement, she directed the prosecution to avail the defence the video clips and electronic materials as requested.

Aliyu in his submission said he would comply with the court’s directive and make them available to the defence team within two weeks.

The AGF lawyer also hinted that the witnesses would be called within five days.

Justice Ojukwu, after taking the arguments, adjourned the matter until March 11, March 12 and March 13 for definite trial.

We are guided by rule of law, I can’t order Sowore’s release ― Malami