Fear grips policemen in Edo over threats from jail breakers 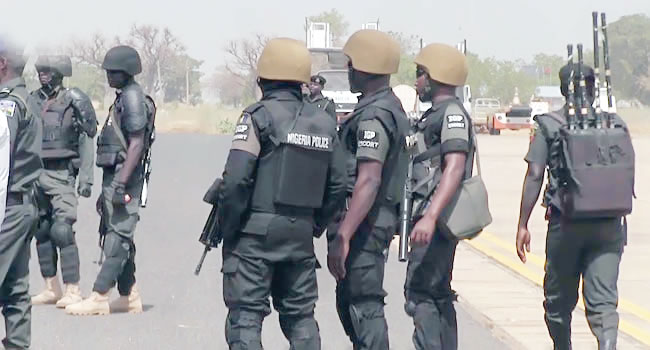 The worsening  security situation in Benin City, Edo State capital, deteriorated on Saturday as policemen, especially those who served as Investigating Police Officers (IPO’s) of the prisoners who escaped from the two Correctional Centres in the city, have been receiving threat messages from the escapees.

This was just as a medical doctor attached to the Central Hospital, Benin City, Maxwell Orosanye, was shot on Saturday at Mobil filling station along Siluko road and his Toyota Corolla car snatched from him.

Edo State Commissioner of Police, Johnson Kokumo, who disclosed the threats to his officers and men added that the test messages were sent to those officers whose in the course of their duty, prosecuted and secured the conviction of the escaped prisoners.

Kokumo disclosed that his men had been working with the existing limitations to restore normalcy to the state, just as he said the three policemen shot on Friday by hoodlums were recuperating.

“You can imagine what it means that three police stations along Sokponba Road were destroyed and burnt, patrol vehicles destroyed in several other parts of the state capital, all the officers in these stations now operate from the headquarters”, he lamented.

It would be recalled that the #EndSARS protest was on October 19 hijacked by hoodlums and in the ensuing violence, inmates  were set free from the two Correctional Centres at Sapele Road and Oko, Airport Road. This was in addition to burning down of seven police stations in the Benin metropolis.

The situation, the top police officer, noted was telling on the operations of the Command.

“What do you expect? Some of these escapees have been sending threat messages to policemen who investigated and prosecuted them, one of the escapees who was convicted for murder went that same day to kill the prosecution witness in his village, but he was rearrested immediately. Everybody must be part of the restoration of sanity. People who know these escapees should avail us information about them”, the Commissioner of Police pleaded.

He however, assured that “we are not sleeping but with what has happened to the police in Edo, some of these hitches are expected. But we are not sleeping and we will continue to work. As I speak to you I am on my way to visit three of our personnel, an Assistant Commissioner of Police and two Inspectors who were shot, they recuperating.”

Three persons were Saturday shot dead along Evidence Street by Isior, an outskirt of Benin.  while two other dead bodies were discovered near Uselu along Ugbowo Road early Saturday morning.