My father named me Mammy… and after marriage, I started Mammy market business in army barracks —Mammy Ochefu 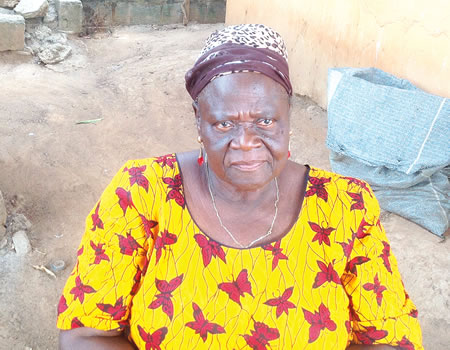 Various military barracks across the country have one thing in common and that is the ubiquitous presence of the joint popularly known as the Mammy Market where soldiers and civilians alike mingle, on a daily basis, to purchase their essentials. Unknown to many, however, is the fact that the concept of Mammy Market is the idea of a woman whose real name is Mammy Ochefu, the wife of a retired military officer, who started the initiative in 1955. In this interview by JOHNSON BABAJIDE, she speaks on how she came up with the idea, among other issues.

Today, we have Mammy market all over the military barracks and the origin of the business has been traced to you. How did it start?

The idea of a Mammy market was conceived in 1955 when I got married to my husband. At that time, my husband was a corporal serving in the Enugu Second Battalion. He had so many dependants and I thought of what to do to support him. So, the idea of making ‘enyi’, known as ‘mowe’ in the barracks, came to me.

When I started the business, some people were complaining of flies. You know, in the barracks, they do not allow filth because they want every place to be neat. And it is not that I was dirty with the preparation of ‘enyi’, but no matter how you clean the environment, flies will still be around.

So when the complaints were so much, I had to stop doing it for a week. But there was pressure from customers who had liked the ‘enyi’ and I told them the reason why I stopped it. But one WO2 (Warrant Officer 2) went and cleared a place for me to continue with the business. Later, one officer, a Lieutenant Colonel, an Igbo man, I have forgotten his name now, ordered that a local bacha, (kiosk) be built for me. Then, I resumed the business.

The ‘enyi’ was very good and soldiers were patronising me, particularly, early in the morning and during their break time. They would come and drink. But we did not stay long before we were posted out of Enugu.

Where was your husband posted to?

We were posted to Abeokuta.

What happened to your business after you left Enugu?

An Idoma woman, whose name I have forgotten now took over the business because ‘enyi’ is an Idoma drink. So, on getting to Abeokuta, I resumed the business there and was getting patronage until when my husband was posted out again.

That means you resume business at each barrack your husband was posted to?

Yes. You know soldiers are always moving around.

Can you remember most of the barracks your husband was posted to and where you introduced the business?

Yes. After we spent about four months in Enugu, we were posted to Abeokuta where we spent about six months. In Ibadan, we spent something like six months. We spent 15 years in Lagos, about 10 years in Kaduna, one year in Zaria and we eventually came back to Enugu

So you opened the business in all these barracks?

Yes. Then, I would look at other things that the soldiers in each barrack liked and add them to the menu. For instance, in Kaduna, I added kunu, tuwo shinkafa and other things they liked.

At the time you started this business in Enugu, how much did it cost you?

((Laughs). I did not have anything except what I needed for the drink. I doubt if it cost me more than One Shilling.

What were the materials used to produce ‘enyi’?

You will need potatoes, corn, rice and soya beans. You soak them and allow them to ferment. Then, you prepare it without adding sugar and it is very sweet.

How did you come about the name, Mammy?

Laughter…..It is a long story but let me cut short. My father told me that at the time I was born, he (my father) was working with white men that came to our village. But on a particular day, one white man came to our village. My father went to receive him and carried his box. On getting to the village, my father was told that my mother was in labour and he took permission to go and see his wife. Luckily before his arrival my mother had given birth to me. So when my father returned to the white man,  he told the white man that his wife had given birth to ‘Enem’, and the white man said ‘Mammy’. That was how I was named Mammy.

How did this business spread to other barracks?

I told you that each time we were posted to a new barrack, I came up with the business. But as we were being posted out, some women who saw how I was making little money from the business would take over and so many started joining the business, even before leaving. But most of the women were Idomas at the beginning.

How do you feel that every barrack now has a Mammy market?

It was my children that started telling me that the market is growing in military barracks with my name, Mammy. I didn’t know anything about it.

Has the military given you any recognition for this innovative idea?

Not at all. Maybe later. They have never made any contact with me.

What were the major challenges then?

Finance is the only challenge, even till today, because if you do not have enough money, it will be difficult for business to grow. Initially, I thought of taking a loan from the bank but the interest scared me and I dropped the idea.

Any financial gain from the business?

Of course, I used the proceeds from the business to support my husband and train all our children.

After your husband retired, did you venture into any other business?

The point is that we stayed long in Lagos and as the business was growing, I had to register the business , ‘Mammy Market’, I think sometimes in 1971 and, by the time my husband retired, the business was incorporated and we were into supermarket and transport business

There is the belief that in those days, wives of military men were full-time housewives…

Yes, because the woman had to take care of the children and prepare meal thrice a day to go and give their husbands at their post of work.

But how were you able to break the barrier?

Actually, it was not easy to convince my husband because he refused the idea when I initially told him. He said other soldiers’ wives were at home taking care of their children. But I told him it was meant to assist him. Grudgingly, he accepted.

Soldiers are known to be disciplined even at the home front. What was your husband’s attitude towards you as his wife?

It is true that my husband was a disciplined man; he behaved like the white people while I behaved like an African. For about 45-years we spent together as husband and wife, he never raised his hand at me, even when I looked for his trouble.

Colonel Ochefu rose to become a military governor. Did you abandon the business?

No; not immediately. I think we were in Lagos when he was made the military governor of the East Central State, in Enugu. I was going about my business; it took us a few months before I joined him and that was after pressure from people. You know, most of the children at that time were in the boarding schools except the youngest one. I left the business in the hands of four people. At that time, I had big shops and a poultry farm.

As the wife of a military governor then, what were your duties?

Nothing. Unlike now that you have Office of the First Lady, there was nothing like that then. You stayed at home. When there was any social function to attend with your husband, you go and come back. You know, in our time, there was no room for corruption.

With the recognition given to wives of governors now, do you feel like turning the hands of the clock to enjoy the parks of office?

No, no, no. It is their time. As the First Lady, the wives of military governors had responsibilities. We had our time and we loved it the way it was.

What did you miss after your husband retired?

I did not miss anything and neither did my husband, after his retirement.

Can you remember any of the officers who were patronising your business in the barracks then?

Yes, I remember we once lived in the same quarters with General Muhammadu Buhari (now the president), General Ibrahim Babangida, Ikya, Ejiga,Ataua Dickson and many of the officers who used to patronise my business then. This was because, in Kaduna, I added tuwo shinkafa and others to the business which attracted them.

What was President Buhari’s way of life then?

We lived in the same quarter. The man is a good man; caring and generous. If he did not see his neighbor for a few days he would come calling asking why such person was not seen. For instance, when my husband was posted out of Kaduna, Buhari would always ask after the kids and why I did not follow my husband immediately he left on transfer. I told him I could not go with my husband until the children were on vacation and to begin a new term in the new station. He would say, ‘okay, it is true’. Buhari was always having sweets in his bag.

Do you think he can still recognise you?

Yes. On many occasions, if he sees me at the airport, he would greet me. He still recognises me.

If you see him now that he is president, what would you ask him?

If I see him now, I would thank God for his life. I would ask him to correct the wrongs made by past governments because I believe the man is capable to provide good governance. The problems he inherited were too much. Imagine this building (pointing at the boys’ quarters of her residence) about to collapse, it will take time to rebuild it. So that is what Buhari is doing now. I wish Nigerians are patient with him. With his background, Buhari is not someone that has passion for inordinate accumulation of wealth because he is from a wealthy family.

So, you would not make any personal request if you met him?

Well, I would ask him to assist me and my children.