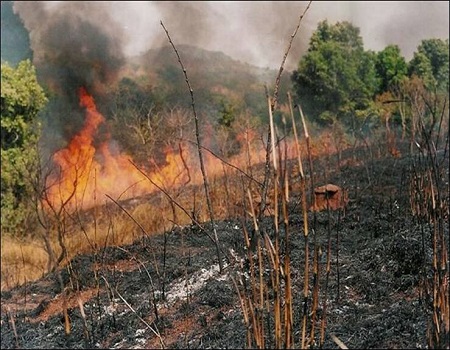 STAKEHOLDERS in Ogun State have issued a warning to farmers in the region against bush burning.

The warning is coming on the heels of the recent fire incident that razed farm plantations, with losses running into several millions of naira. The recent occurrence happened last week in a mysterious fire breakout which destroyed a 10-hectare oil palm plantation around Onipepeye, along Abeokuta-Siun-Sagamu expressway, in Obafemi-Owode Local Government, Ogun State.

It was gathered that the losses recorded at the farm, owned by the former Nigeria Ambassador to Zambia/Malawi, and one-time Commissioner for Women Affairs in the state, Folake-Marcus-Bello, are running into several millions of naira, as over 500 palm trees, among others farm produce ready for harvest, were destroyed.

The head of Farmers (Baale Agbe) in Imeko area, Ogun State, Chief Abdulazeez Ismail Abolore, who disclosed that quite a number of such incidents were recorded last year, warned farmers to desist from indiscriminate bush burning.

He said: “We have started the campaign in our area, warning farmers, hunters and youths from engaging in indiscriminate bush burning. Most times the fire goes out of control, destroying crops and other valuables.

“We have also tutored farmers to ensure that the borderline of their farms are weeded, so that in the case of any unforeseen fire outbreak, it will be difficult for the farm to catch fire.”