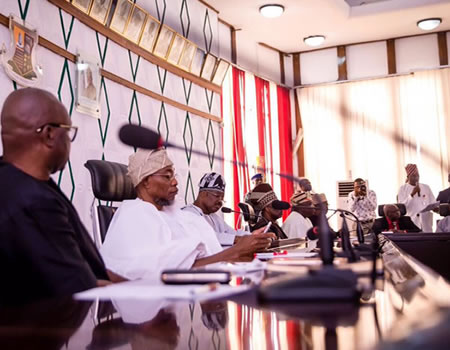 The meeting of the South West Governors’s Forum scheduled to hold on (Monday) today in Ogun State, has been put on hold in honour of the late Director General of the Development Agenda for Western Nigeria (DAWN),  Mr. Dipo Famakinwa.

The meeting with the theme: “Integrating For A Prosperous Future” is expected to have in attendance the governors of Ogun,  Oyo, Osun, Ekiti, Lagos and Ondo in attendance.

In a statement made available to  Tribune Online by the Senior Special Assistant (Media), Juwon Soyinka, had it that a new date will be communicated for the meeting.

The statement read, “This is to announce that the planned meeting of the South West Governor’s Forum scheduled to hold in Abeokuta, the Ogun State capital, on Monday, April 24, 2017, has been put on hold.

“The South West Governors have decided to put the meting on hold in honour of the Director General of the Development Agenda for Western Nigeria, DAWN Commission, Mr. Dipo Famakinwa, who sadly passed away on Friday, April 21, 2017.

“While we regret any inconveniences this might have caused, a future date for the meeting will be duly communicated.”