#FactCheck: Has INEC issued Certificate of Return to Ademola Adeleke as Osun governor-elect? Tribune has an answer 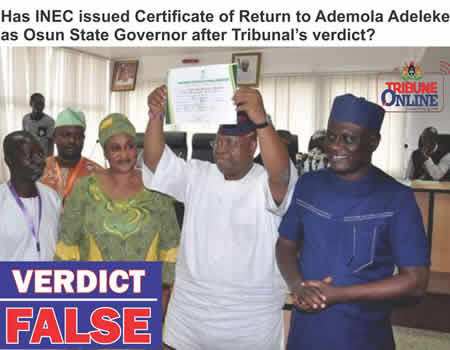 Facebook, Twitter and some online media in Nigeria claimed that Senator Ademola Adeleke, the Senator representing Osun-West Senatorial district, who contested in the September 22, 2018, governorship election in the state, has been issued Certificate of Return by the Independent National Electoral Commission (INEC), following the Friday, March 22, 2019 Tribunal Court judgment.

On Friday, March 22, The Osun State Governorship Election Petition Tribunal sitting in Abuja, declared Senator Ademola Adeleke, the candidate of the Peoples Democratic Party (PDP), as the winner of the September 22, 2018 election in the state.

Tribune Online had, also on Saturday, March 23, reported that Adeleke’s lawyers had commenced move to get Certificate of Return from INEC.

But people on Monday, March 25, woke up to the circulation of the picture above on social media, saying INEC has issued the Certificate of Return to Senator Ademola Adeleke.

Online media like Puoreports, aigmediapro and gallantmedia were among the platforms that reported the news.

The same claim was also posted on Facebook at exactly 4:02 pm on Monday by the Facebook page of an online media called Nigeria News Bulletin, the post gathered 217 likes, 137 comments and 563 shares.

“The commission has not issued any new certificate in relation to Osun State,” INEC National Commissioner and Chairman, Information and Voter Education Committee, Barr Festus Okoye, told Leadership Newspaper while debunking rumours that Adeleke has been issued a certificate of return.

“Section 143(1) of the Electoral Act gives a candidate whose election is set aside a period of 21 days from the date of the decision to appeal against such a decision,” Okoye said, while explaining why the commission can’t issue a certificate of return to Adeleke.

The Peoples Democratic Party (PDP) Chairman in Osun State, Hon Olasoji Adagunodo, who is one of the men captured in the picture being circulated also disclosed that the claim is false.

Adagunodo disclosed this via his Facebook page that although the Tribunal Court has declared the party’s candidate as the winner of the 2018 governorship election in the state, but he has not been issued the certificate of return because there is law process that need to be followed.

He said the picture being circulated on the social media was taken in the year 2017 when Ademola Adeleke emerged the Senator for the Osun-West Senatorial District and was issued the Certificate of Return.

TRIBUNE VERDICT: THE CLAIM IS FALSE

This claim is false; INEC has not issued certificate of return to Senator Ademola Adeleke as the Osun State governor-elect. The INEC national commissioner and chairman, information and voter education committee, Festus Okoye has debunked the claim.

WHAT THE LAW SAYS

A law practitioner, Barrister Kolawole Salami has said that it is impossible for INEC to issue a certificate of return when there is likely to be a subsisting appeal.

“The extant law is that when a judgment is being appeal, there will be stay of execution of the judgement until the final decision by the appellate courts,” he said.

He further said that the window for appeal is normally 21 days.