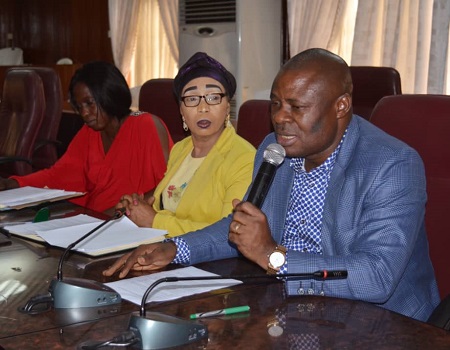 FOLLOWING the excessive deductions from the commercial banks, Ebonyi State Government has resolved to battle the banks over unauthorized deductions on Government accounts for the past eleven years.

The commissioner for finance in Ebonyi state, Obinna Nwachukwu disclosed this to Newsmen in a joint briefing with the Accountant-General, Queen Agwu, at Government House, Abakaliki.

According to the duo, state Executive Council has charged the appropriate agency of Government to vigorously pursue and recover from 2007 to date of those alleged illegal deductions from the Banks.

Nwachukwu and Agwu took turns to explain to journalists that in spite of its abolition for corporate accounts by the Central Bank of Nigeria (CBN) since 2007, the Banks had gone ahead to effect Charges on Turnover (COT) against Government accounts.

Moreover, it has also been discovered that most of the Commercial Banks in the State continue to effect deductions on loans and overdrafts obtained by the Government long after such has been repaid in full, adding that such was a huge financial sabotage against the developmental agenda of Governor David Umahi.

They noted that pursuant to the development, the office of the State Accountant-General, under the Ministry of Finance had written the Banks to supply to it Statements on all transactions by the State Government for the period to enable it ascertain the actual amount involved in the wrongful transactions.

The Accountant-General who, however, regretted that some of the banks have transferred their Branch Managers in the State in a bid to circumvent the directive, warned that the State Government would not hesitate to adopt all necessary measures to enforce compliance, including total withdrawal of patronage.

The Accountant-General noted: “We discovered immediately this administration came on board that there are monies hanging here and there in the hands of banks.

“Then, the Government engaged a team of consultant to carry out what is called a Back Duty Audit in professional parlance.

“But like you know, everybody has a personal self-defence.

“The Banks are saying that they are legally allowed to do these deductions but it is not correct.

“You cannot be legally allowed to do what is not right…and that is why this Government is hell-bent on getting that money because when we get the money, we will use it to execute projects in the State, including payment of workers’ salaries.”

Mrs Agwu who admitted that the issue has remained a matter of serious dialogue between the Banks and the State Government, said some concerned reasonable Banks have started complying with Government’s directives on the development.

She further observed that the past Government lacked the political will to enforce the recovery of the funds from the Banks, when they were initially discovered, adding the Umahi’s administration in the contrary has the combination of both the political will and expertise to recover the funds to boost its transformation agenda in the State.

Meanwhile, when newsmen approached some of the Banks for comments, they declined, referring them to their corporate headquarters for reactions.