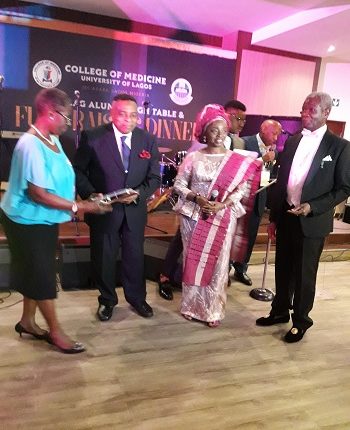 As a way of strengthening health education in the country through their Alma mater, graduates from the College of Medicine, University of Lagos (UNILAG), Akoka, have intensified efforts to raise nothing less than N7.5 billion among themselves, friends of the college and other philanthropists in the country.

The huge amount expected to be raised over a number of years starting from last year if realised would be used to build a high standard research centre worth N2 billion and a teaching and administrative block worth N3 billion and to buy utility vehicles at a cost of N314 million, various labs equipment at a cost of N226.4 million, provide Vevo 3100 live imaging platform at a cost of N265 million and expand Block M and Q at a cost of N450 million, among others.

A Professor of Anatomy and Chairman of the organising committee of the event, Oladapo Ashiru, made this disclosure at this year’s high table\fund raising dinner of the group held at Lekki in Lagos, last Saturday.

Among the high profile alumni of the college at the annual event, which was second in the series, are the Lagos State governor’s wife, Mrs Joke Sanwo-Olu, who represented her husband as special guest of honour; the Co-founder of Eko Hospital, Dr Olor’ogun Sunny Kuku; Professors Debo Adeyemi,  Stephen Odaibo; Nimi Briggs, and numerous others.

Speaking with newsmen on the sideline of the event, Professor Ashiru said the provision of all the identified current needs of the 58-year-old college would not only boost the quality of knowledge and skills to be imparted on students and research activities but would also stem the brain drain and medical tourism syndromes in the country.

He said it is impossible for the government to all alone fund quality education anywhere in the world, hence the essence of the private sector including alumni associations’ intervention in giving back to their Alma mater.

In their own separate chats also at the event, the college’s provost, Prof Afolabi Lesi and the national chairman of the alumni association, Dr Ajibayo Adeyeye, said apart from the money being raised through the dinner, the event also avails alumni opportunity to reunite after many years of graduation.

They said their belief is that they should be able to give back in a little way possible to the college that produced them and more so that government financial commitment to the college cannot take the college anywhere.

However, the high-point of the event was the presentation of recognition awards to some personalities including Gov. Babajide Sanwo-Olu, who was represented by his wife and also outstanding alumni awards to 24 notable members of the group, including Olor’ogun Sunny Kuku; Professors Debo Adeyemi, Stephen Odaibo; Nimi Briggs, Ashiru Oladapo, Afolabi Lesi, Rowland Ndoma Egba, Lovett Lawson, Banji Adewuyi and so forth.

Gbajabiamila warns CBN, others against contempt of legislative powers

UNILAG won’t cover up on sex for marks allegations ― VC