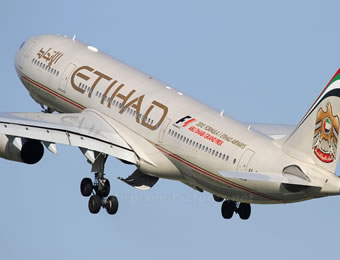 Etihad Airways, the national airline of the United Arab Emirates, this week celebrates the fourth anniversary of the launch of its non-stop services between Lagos and Abu Dhabi in July 2012.

In celebration, the airline had on Monday offered free Wi-Fi access for guests traveling on its flight between Lagos and the airline’s hub in Abu Dhabi.

George Mawadri, Etihad Airways’ General Manager in Nigeria, said the airline was delighted to celebrate the milestone and thanked everyone who had contributed to its success.

“We are proud to have carried many thousands of guests to and from Nigeria since we launched our services here four years ago. Nigeria is a very important market, and we are committed to providing our travelers with world class travel experiences, renowned hospitality, and a greater choice of destinations whether they are traveling for business or leisure.

“I would also like to say a big thank you to all our partners in the local travel trade for their tremendous support over the last four years, and look forward to working even closer together in future.”

Still on the turmoil in God’s own state

Why we oppose privatisation of airports —NUP