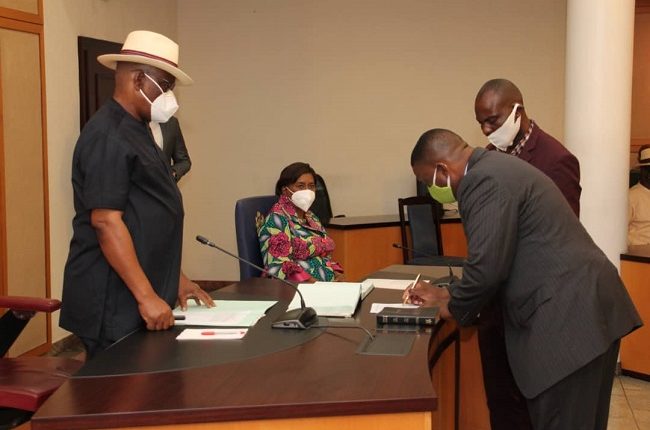 Nyesom Wike, Governor of Rivers State, on Thursday, inaugurated a Judicial Commission of Inquiry to investigate acts of brutality and violation of fundamental human rights perpetrated by operatives of the disbanded Special Anti-Robbery Squad (SARS) in the State.

Members of the commission were selected from Nigerian Bar Association, FIDA, youth, civil society, women and religious groups and are expected to submit its report sixty days from the date of its first sitting.

He charged the commission to ascertain whether any of the officers, men and operatives of the Police, particularly, F-SARS involved in alleged acts of violence, torture, brutality, murder, violation of fundamental human rights or other atrocities in Rivers State was sponsored, counselled and procured by any person, group of persons, or officer of Rivers State government by whatever designation.

He said the commission is expected to identify persons or group of persons who counselled, procured and sponsored alleged acts of violence and violation of human rights of citizens committed by personnel of F-SARS in the state.

He also tasked the commission to identify the victims of the said alleged acts of atrocities committed by officers and men of F-SARS.

He tasked the commission to ascertain the motive if any of the officers and operatives of F-SARS, who committed or participated in the commission of the alleged acts of torture, murder, brutality and violation of rights that occurred in Rivers State.

In addition, Wike directed the commission to ascertain whether any of the victims of the alleged acts of violence by F-SARS is being held in detention or custody and the identity of such victim as well as the place of detention.

The commission was further enjoined to make appropriate recommendations to the government on measures and means of preventing the occurrence of such acts of violence and violation of rights perpetrated by operatives of F-SARS, and how they can be held accountable for such acts.

“Recommend appropriate sanctions, punishment or other penalties to be imposed on the perpetrators of the said acts of violence, torture, murder, and violation of fundamental rights and/or other atrocities that occurred in Rivers State”, the Governor said.

Chairman of the commission, Justice Chukwunenye. I. Uriri (rtd), lauded Governor Wike for the privilege to serve the State.

He assured the governor that the commission will discharge its duties with a clear conscience and within the limits of the law.

Present at the inauguration ceremony were the Rivers State Deputy Governor, Dr. (Mrs) Ipalibo Harry Banigo; the Attorney General and Commissioner for Justice, Professor Zacchaeus Adangor; the Secretary to the State Government, Dr Tammy Danagogo; Commissioner of Information and Communications, Paulinus Nsirim among others.