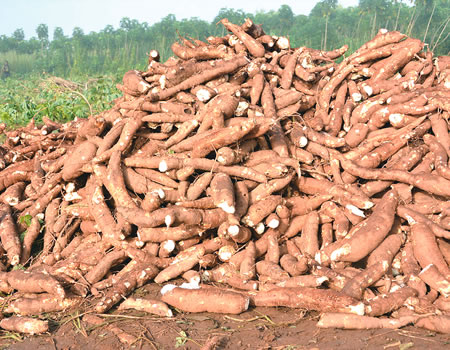 The Emir of Wamba, Alhaji Lawal Musa-Nagogo, has advised his subjects to embrace cassava farming, considering its strategic importance in the nation’s quest to attain food security.

The emir gave the advice on Thursday in an interview with News Agency of Nigeria (NAN) in Wamba, Wamba Local Government Area of Nasarawa State.

He said that cassava could be used for many purposes, adding that Nigerians should, therefore, engage in cassava farming in order to boost the country’s agricultural production.

“The main occupation of Wamba people is agriculture, which is cassava farming, and cassava can be processed into various kinds of food products as cassava flour and garri, among others.

“In the past, people take cassava flour (Alabo) for granted and its price then was very cheap then but now, cassava flour and garri are quite expensive,’’ he said.

The traditional ruler said: “If farmers embrace cassava production, it could improve their standard of living.

“Apart from that, cassava farming can serve as sources of food and employment as well as a means of fighting social vices,” he said.

Musa-Nagogo also called on Nigerians to engage in farming, saying that no society could survive without agriculture.

“Agriculture is the major source of livelihood of many families and its importance to the development of any society can never be over-emphasised,’’ he said

Musa-Nagogo urged Nigerians to pray and support their leaders to enable them to succeed in the nation-building tasks ahead of them.

He urged the citizens to be law abiding, while respecting constituted authorities and promoting the nation’s development.