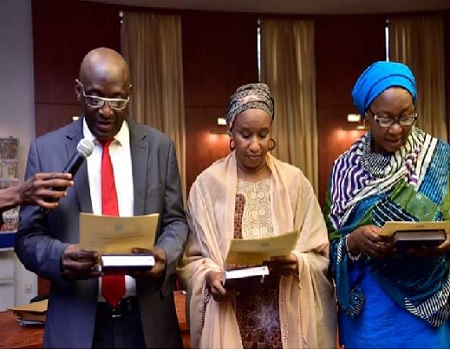 El-Rufai said the two new Commissioners took the oath of office after they were cleared by the State House of Assembly.

NAN also reports that the two new appointees brought to seven the number of women serving in the Cabinet of El-Rufai.

Meanwhile, eight officials had also taken Oath of office as Permanent Secretaries in the state.

The Governor also swore in Muhammed Jalal as commissioner in the State Fiscal Responsibility Commission.

Speaking shortly after the swearing-in, the Governor tasked the officials to work towards improving the lives of the people of the state.

“The work of catering life of the people of Kaduna state is a 24-hour job, seven days a week.

“Kaduna government requires more than 24 hours to work for its people,” he said.

El-Rufai welcomed the new officials to the council and wished them well in their new assignment.

He said the appointments would serve as the beginning of their growth and development to more senior positions in the country.

“For the Permanent Secretaries I don’t have to say anything on that they have been in the system they know the job,” he said.

According to him, the appointments were based on merit in their various careers.

While thanking them for accepting to serve the state and the people, he, however, urged the citizens to pray and support them in the discharge of their duties for a better Kaduna State.

“Your competency is not a doubt, you were screened and chosen from hundreds and we are happy to welcome you, “he added.