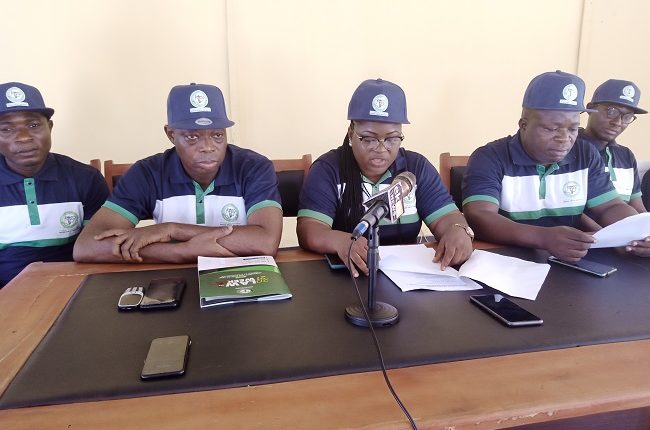 The Nigerian Bar Association (NBA) Ikere-Ekiti branch has condemned Saturday’s clampdown on peaceful Yoruba nation agitators in Lagos, describing the act as antithetical and unknown to any democratic settings across the globe.

The chairperson of Ikere-Ekiti branch of NBA, Kikelomo Owolabi who spoke with newsmen on Monday heralding the 2021 press week of the branch with the theme, ‘ Insecurity and Rule of Law: Nigeria at a Crossroad ‘ said the association was astonished that agents of government would pounce on people peacefully agitating.

She called on the federal government not to turn the country into a lawless one through a sustained clampdown on perceived anti-government voices but allowed residents to express themselves without any fear of attack or victimization.

Owolabi added that the people have the legitimate rights under the constitution to demonstrate peacefully, saying the Sunday’s arrest of about ten youths in a church in Abuja for wearing anti-government clothes stands condemned by the association.

According to her, “Our association condemned the Saturday’s attack and arrest of peaceful protesters in Lagos, this development is strange to us because we are a democracy and not in a lawless country.

“It is our right to demonstrate peacefully in the streets and the actions of the police and other law enforcement agencies is condemnable.”

As part of activities for the law week, Owolabi revealed that the Chief Judge of Ondo State, Justice Oluwatoyin Akeredolu will be delivering a lecture titled, ‘The Rule of Law: A Corner Stone of Peace and Insecurity in Nigeria ‘ in honour of the retired supreme court judge from the town, Justice Ekundayo Ogundare.

She added that the second Wole Olanipekun SAN public lecture will also be held alongside the sensitization of members on High Court civil procedure rules by Justice Omotosho which will be chaired by the acting Chief Judge of Ekiti, Justice Oyewole Adeyeye.

The chairperson who lamented that the lawyers are yet to recover from the last strike action by the Judicial Staff Union of Nigeria (JUSUN) reiterated the commitment of the branch to the implementation of financial autonomy for the judiciary.

“For us, the autonomy of the judiciary is non-negotiable and don’t forget the strike by JUSUN, we were deeply affected. The financial autonomy will further improve the justice system in our country,” she said.

FG laments over vandalization of oil facilities in Niger Delta