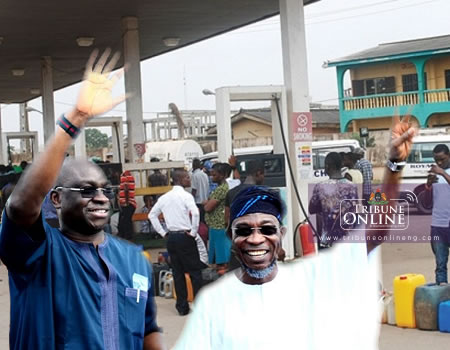 Ekiti greeted the end to a three week war  between Ekiti State Governor Ayodele Fayose and oil marketers in the state with wild jubilation as the two parties reached pact and sheath swords after a peace meeting brokered by Governor of Osun State, Ogbeni Rauf Aregbesola at the government House in Oshogbo on Sunday evening.

According to a release by Fayose’s Chief Press Secretary, Idowu Adelusi, after agreeing on terms for the resolution of crisis, a communique from the peace meeting was signed by Governors Fayose and Aregbesola, NUPENG, General Secretary, Joseph Ogbebor, IPMAN, Zonal Chairman, Alhaji Debo Ahmed and PTD NUPENG, National Vice Chairman, Comrade Solomon Kilanko.

The resolutions on the two state government and oil marketers as stated by Adelusi in his release are as follows: “An ad hoc committee be constituted to fashion out in clear terms the conditions and guidelines for the establishment and operations of filling stations in Ekiti State;

“The committee comprising representatives of Ekiti State Government and oil and gas stakeholders shall commence work on Wednesday 7th June, 2017;

“In the spirit of reconciliation, Ekiti State Government agreed to pleas for reversal of the revocation of some Certificates of Occupancy of landed properties on which filling stations are built, except the ones on waterways, canals and where there is no justification for such revocation;

“In that same spirit, the government agreed to stop further demolitions pending the outcome of the committee’s report; and consequently, the Nigerian Union of Petroleum and Natural Gas Workers (NUPENG), Independent Petroleum Marketers Association of Nigeria (IPMAN) and other related oil and gas unions hereby suspend the industrial action embarked upon by their members, with immediate effect.”