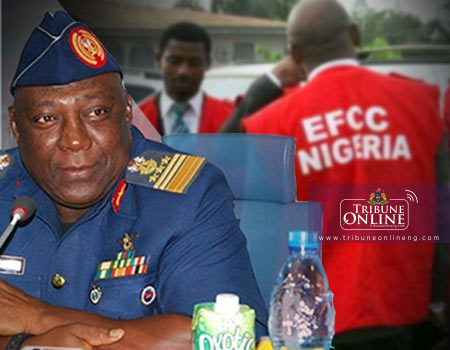 The Economic and Financial Crimes Commission (EFCC) on Wednesday sought the permission of a Federal High Court sitting in Lagos to visit some of the properties allegedly acquired by a former Chief of Air Staff, Air Marshal Adesola Amosu Nunayon (rtd) and two other naval officers standing trial with him over alleged N22.8 billion fraud through proceeds of crime.

EFCC prosecutor, Rotimi Oyedepo  made an oral application urging the court to visit the “locus in quo” for the purpose  of admitting the various immovable property allegedly fraudulently acquired by Amosu and his co-accused.

According to him, Section 127 of the Evidence Act allows the court to visit the “locus” where oral evidence led in the course of proceedings referred to the existence of a material thing.

In his arguments, Oyedepo read out some of the counts in the charge wherein property bought by the accused persons with proceeds of crime were listed.

The lawyer while noting that the onus is on the prosecution to prove its case against the accused persons said court’s visit to the “locus” is a way by which it intends to achieve this.

“The purpose of the application is only to allow for the confirmation of the existence of the property in question,” he said.

However, while opposing the application, Amosu’s lawyer, Chief Bolaji Ayorinde (SAN) argued that court’s visit to a “locus” is not at large.

According to him, any visit must be specific, direct and linked to evidences already given in the course of proceedings.

“My lord, I am not yet in possession of the list of specific property and their addresses where they were situated and as such I don’t think this is an appropriate application,” the silk said.

Ayorinde while noting that proper foundation has not been laid by the EFCC’s lawyer for the application to be granted by the court, said there is no compelling reason to warrant such visit.

He further argued that instead of seeking court’s visit to the “locus”, the prosecution should rather lead quality evidence with regards to the existence of such property.

After listening to submissions of parties, Justice Mohammed Idris fixed Thursday for ruling.