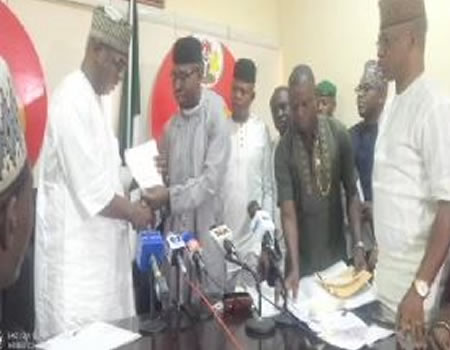 Over N111.4 million recovered from suspected treasury looters in Kwara State by the Economic and Financial Crimes Commission (EFCC) has been handed over to Governor Abdulrahman Abdulrazaq.

Speaking during a brief presentation in Ilorin on Friday, the zonal head of the anti-graft agency, Mr Isyaku Sharu, said that the suspected treasury looters cut across political office holders, traditional ruler and top civil servants.

“The suspects alleged to have criminally misappropriated landed properties of an investment outfit of the state government, Harmony Holdings, while others diverted funds meant for micro, small and medium credit scheme”, he said.

The EFCC boss said that the commission, which started its work at the zonal office in February this year, had achieved a lot in terms of recovery and conviction of corrupt individuals, adding that the commission also saved the state from financial recklessness in May this year at the eve of handing and taking over of government.

ALSO READ: It is possible to have two election in Kogi State― INEC

“We have 29 convictions and over N500million recovery of both assets and cash. Part of this recovery is the N111, 428, 891.00 cash recovery for the Kwara state government.

He said that he was mandated by the chairman of the commission, Mr Ibrahim Magu, to present the draft of the cash recovered as part of the contribution in getting rid of economic and financial crime-related offences in the state and promised their continued support to the state.

Also speaking, Governor Abdulrazaq thanked the EFCC, saying that the cash would be used for a social investment programme to lift poor people out of poverty in the state.

“We are overwhelmed because history is being made in Kwara state with the return of our money recovered by the EFCC especially now that there are many projects to embark on.

“The money will go into social investment programme of the state and also go into most needed programmes. We would let our people know that it is the money realised by the EFCC we are giving them so that they can pay back when they get the loan. It will help to lift thousands of people out of poverty.”

While commending the commission, the governor said that “indeed EFCC is a partner in progress. Nigerians should join hands with the agency by building its capacity”.