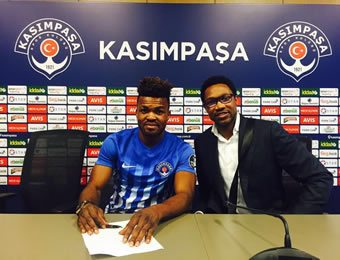 A Turkish club, Kasimpasa has signed Nigeria forward, Emem Eduok till the end of the season.

Eduok, a former Esperance of Tunisia player penned a deal with Kasimpasa on Monday, and stands a chance of extending the deal based on his performance.

Speaking with Tribunesport from his base in Turkey, his UK-based agent, Dr Ojore Oka, said the former Dolphins of Port Harcourt striker has an option for a further deal with the Istanbul-based side another Nigerian international, Kenneth Omeruo played for last season also on loan from Chelsea.

“We had a number of offers from France, Portugal and Egypt, but after meeting with officials of the Turkish club, we decided this was the best place for him to continue his career.

“Eduok is very excited to be in Istanbul and is looking forward to helping the team to achieve success this season,” Oka who is an England FA licensed agent told Tribunesport.

Eduok, it will be recalled played for Nigeria at the 2013 FIFA U-20 World Cup.

He had his first full international cap last September when he played as a substitute when Super Eagles held the Taifa Stars of Tanzania in a 2017 Africa Cup of Nations (AFCON) qualifier to a barren draw in Dar-es Salaam.