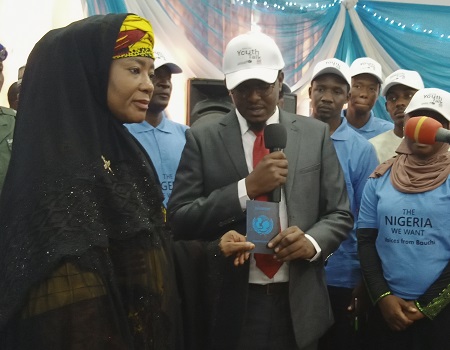 Bauchi State First Lady, Hajiya Aisha Bala Mohammed has stressed the need for Nigerians not to rely on international donor agencies to develop the country but should be prepared to contribute to the development of the country.

Bauchi First Lady who spoke passionately on the importance of education especially for the girl-child opined that education can be used to combat crimes and criminality in the society regretting that the girl-child has been relegated to the background.

While speaking at the 30th Anniversary of the adoption of the Child Rights Convention (CRC) by the UN held at the Banquet Hall of the Government House, Bauchi on Saturday, Aisha Mohammed added that the neglect of the girl-child in terms of education has rendered her useless with no hope for a better tomorrow saying that “we have to ensure that we educate the girl-child so that she will become a good mother in future”.

In his keynote address, UNICEF Chief of D Field Office, Bauchi, Bhanu Pathak lamented that Nigeria has the second-largest number of child-brides in the world with 23 million girls and women married as children which often end their education pursuit.

He also stated that Nigerian children experience a wide range of abuses and harmful practices as 3 out of 5 children have suffered one or more forms of violence before reaching 18, with over 70 per cent experiencing multiple incidents of violence.

Bhanu Pathak further pointed out that in the 30 years since its adoption, the CRC has helped to transform the lives of children worldwide as it established that children are not the property of adults, but people with rights of their own as well as inspired governments including the Nigerian government to change laws and policies to protect children and make more investments in children.

Bhanu Pathak added that although the UN has set a goal that every human being on the planet will have a legal identity by 2030, many children in Nigeria are yet to have their births registered.

Speaking further, the UNICEF Chief of Field Office stated that since 2009, some states in the North-East region have been troubled by a violent conflict stemming from clashes between non-state armed groups (NSAGs) and the Nigerian Military.

He opined that with the massive destruction of towns and villages and ongoing violent attacks by NSAGs, the region has experienced increased population displacement, loss of livelihood, food insecurity and increased morbidly and mortality because of malnutrition, inadequate health services and poor sanitation especially in the most affected states of Adamawa, Borno and Yobe where children are at the receiving end of the atrocities.

Bhanu Pathak further lamented that too many Nigerian children and young people are being left behind especially when it comes to education adding that statistics have it that Nigeria has the world’s highest number of out-of-school children as more than 10.5 million Nigerian children are not in school.

In his remarks, the President of the Nigeria Youth Parliament, Mubarak Mijinyawa assured that the youth are ready to contribute positively to the development of the country saying that all they need is encouragement and space to display their God-given talents.

He added that with support from organizations like the UNICEF, Nigerian youths will sour high in their various fields of expertise.

The celebration has a theme; ‘The Nigeria we want, Voices from Bauchi’ with youths from Adamawa, Bauchi, Gombe, Jigawa, Plateau and Taraba as well as Kaduna in attendance.

Ego Boyo returns with ‘The Ghost and The House of Truth’