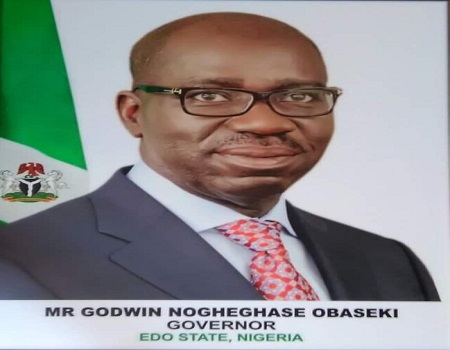 EDO State Governor,  Godwin Obaseki has hinged the implementation of the newly approved N30,00 Minimum Wage on the improvement in internally generated revenue.

The new wage which saw an upward review from N25,000 to N30,000 was approved by the National Assembly was recently signed into law by President Muhammadu Buhari.

Obaseki spoke yesterday while addressing Workers at the annual May day celebration in Benin which witnessed a march past by workers from the different unions affiliated to the Nigeria Labour Congress (NLC) and the Trade Union Congress (TUC).

He said: “Our payment of the new minimum wage will depend on the improvement of collection of tax. Oncr our revenue improves, we will pay.”

Many unions particularly those of the aggrieved pensioners who were painfully adorned in black attire in the past two years wore white clothes, an evidence that the government has started paying them their pension arrears.

On his part, Chairman Edo state Chapter of the TUC, Comrade Marshall also commended the state government on some infrastructural development, uniform administration of revenue collection ,workers welfare including prompt payment of salaries and promotion.

He noted that it was quite frightening at the appalling state of Bendel Newspapers , Edo State School of Nursing and Midwifery as well as Tayo Aptata University and College of Agriculture Iguoroakhi and urged the governor to immediately address the problem.

The Chairman Edo NLC, Comrade Sunday Osayande called on the governor to immediately address issues of promotion and promotion arrears, the union Secretariat in Benin and the swift implementation of the new minimum wage.

Obaseki who was obviously elated by the camaraderie pledged the immediate implementation of the minimum wage sustained promotion, training and retraining of staff whom he acknowledged are the best assets of the state.

Obaseki also promised to complete and commission all on going projects including the abandoned secretariat building, high court complex and health centres across the state as well as a total over haul of the state owned tertiary institutions.