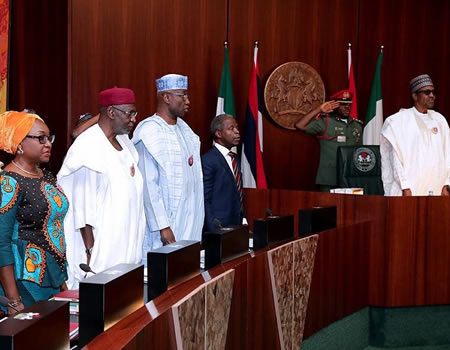 THE Federal Executive Council (FEC) will investigate reports of federal universities collecting tuition fees from students as it maintains that it is illegal to do so.

The Minister of State for Education, Anthony Anwuka, said while briefing State House correspondents on the outcome of the council meeting presided over by Vice President Yemi Osinbajo on Wednesday, that government will investigate the matter.

He observed that there are allegations that some of the institutions are charging students per course unit, which he said is illegal and must be stopped.

Ankuwa said: “No federal university should charge tuition fees. That is the law. And, we understand some universities now charge fees per course unit and we are going to make sure that we investigate that properly and make it stops.

“But students can pay other auxiliary fees but not in excess. Various university councils and management should be able to fix what fees students should pay that is affordable and acceptable to the students. That is the position.

“The federal government does not determine fees for private and state universities. They only take responsibility for fees paid in the federal universities.”

He announced that the council also approved a new license for Skyline University, Kano.

Meanwhile, following the reported outbreak of Ebola in the Democratic Republic of Congo, the FEC has directed the Federal Ministry of Health to step up surveillance at all entry points of entry to prevent the infection from finding its way back to the country.

The Minister of Health, Isaac Adewole disclosed this during the briefing, saying that part of the new strategy to be adopted is screening passengers coming into the country.

He said: “Of course, of great concern to the Federal Executive Council is the outbreak of Ebola in DR Congo. As you might be aware, over the last one month, DRC recorded 19 suspected cases of Viral Hemorrhagic Fever and lost 16 of the cases. But, what is also particularly important was that on Monday, blood samples from five patients in a particular district in DRC, two of the five cases, Ebola was actually confirmed. And FEC has now directed the federal Ministry of Health to step up emergency surveillance activities at all land and airport borders so that we can actually keep Nigerians safe.

“What we will do is to set up an emergency operation centre which will be chaired by Dr. Babatunde Babasanya, who actually led our efforts in Liberia, Sierra Leone and Guinea during the outbreak in 2014.

“Not only that, we will be screening incoming passengers, particularly passengers from DRC and neighbouring countries. We will also ensure we step up all activities screening people coming in so that we will not be caught unawares.”

He said The Nigerian Center for Disease Control (NCDC) will also consider sending some teams to DRC as part of capacity building for managing the outbreak, saying: “We want to assure Nigerians that the federal government is concerned about the outbreak and will do everything possible to keep the country safe.”

The Minister of State for Transportation, Aviation, Hadi Sirika who also spoke at the briefing, revealed that the

council approved the sum of N1.365, 364, 458.75 for the procurement of new equipment for control towers in six of the nation’s airports.

He said FEC approved procurement of equipment for the completion of control towers in some airports that included Maiduguri, Akure, Benin, Ilorin, Kaduna and Ibadan.

“This particular procurement was done in 2011. From 2011, the government stopped funding a particular procurement with all its importance. So, we provided for it in 2017 so that we can complete it. And the council has graciously approved to complete those control towers which will enhance communications and security of our airspace. The total value is N1.365, 364, 458.75,” he added.

In his remark, Minister of Foreign Affairs, Geoffrey Onyeama, explained the demand by United States President Donald Trump for Nigeria to take down trade barriers for America agriculture products into Nigeria which came up

during President Muhammadu Buhari’s recent meeting with him.

He said the US President complained that Nigeria placed the barriers despite the support Nigeria enjoyed from the country in the numerous areas.

“The report that he read out indicated that there were a number of trade barriers that US agricultural products face to enter the Nigerian market. President Trump was of the view that considering the level of cooperation and assistance the US provides to Nigeria, that we should do much more to remove those barriers.

“We made a point in that context also that the framework of the African Growth and Opportunities Act, that Nigerian agriculture products also face some barriers entering the US market, especially phoney-sanitary barriers, the standards of those agricultural products. So, obviously work also need to be done to address those and to provide greater market access for our agricultural products.

“So, that was essentially the situation and the idea of the agreement is that there will be follow up at the technical level to review these issues. And as you know, we have an institutional mechanism that is supposed to be meeting this year, a Bi-National commission which is quite comprehensive, the US and Nigeria, we meet once every year to look at all the different sectors and our cooperations in the framework of those sectors.”