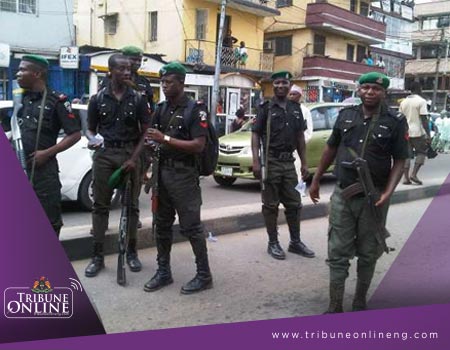 A dismissed policeman, Mr Kenneth Chikwe and 13 others have been arrested by the Anambra State police command for various offenses ranging from armed robbery, kidnapping, car snatching and alleged stealing of a child.

Anambra State Commissioner of Police, Mr Garba Umar said during the parade of some of the suspects at the state police command headquarters in Awka, that Chikwe was arrested with bullet wounds in Awka after allegedly robbing two persons of a Range Rover Sport with Lagos registration number, MUS 644 BB and a Hilux Jeep with registration number LND 685 EW.

According to the CP, Chikwe’s confession led to the arrest of his accomplice, Mr Uzohu Livingstone, 51, at Owerri, Imo State, and recovery of the two vehicles.

Umar said that the two suspects provided useful information that could lead to the arrest of other members of the gang and possible recovery of other stolen vehicles in their possession.

He, however, said that the dismissed policeman later died, adding that apart from the vehicles, other items recovered include one AK 47 rifle, 20 rounds of ammunition, one K2rifle with 15 live ammunition, one pump action gun with five cartridges and one locally made pistol.

The commissioner said further that three other persons named, Oluchukwu Nwajide, Chukwuebeuka Ugwu and Kosisochukwu Nwacho, aged between 18 and 19 years, were arrested at Nnokwa for stealing a five –year old boy from Agboa village, Nnobi, adding that the victim was rescued in good health and reunited with his family.

Seven other suspects, he added, were arrested for armed robbery and kidnapping after they stormed the residence of one Sylvester Arebun at Uromi in Edo State and robbed him of a Honda Pilot car with registration number, AAA 556 EM and took the vehicle to spare parts market at Obosi in Anambra State to sell, before luck ran out of them.

He said that another suspect, Chinonso Anunobi aged 23 years, said to be involved in series of armed robbery, cultism, and murder, was arrested at Oko, Anambra State, adding that preliminary investigation revealed that he was a member of the gang that allegedly killed one Chibuzor Ajaedo at Nkpor on November 9, 2016.

CP Umar said: “Let me use this opportunity to appeal to the general public now that the gubernatorial campaigns have commenced for the November 18th election, that they should feel free and come up with any vital information that will be of great assistance to the command in the fight against crime and criminality and other misguided elements. This will help to sustain the existing peace in the state before, during and after the election.

Our personnel not involved in any armed robbery ― Bauchi Police