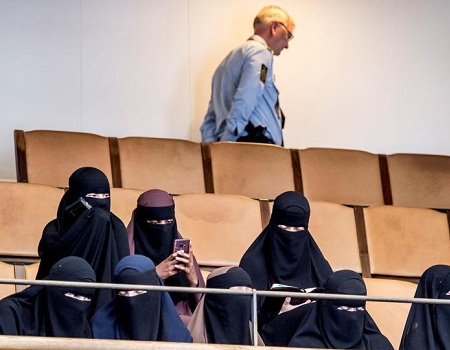 DENMARK has banned the wearing of face veils in public, joining France and other parts of Europe in outlawing the burqa and the niqab worn by some Muslim women.

Parliament voted on Thursday for the law proposed by the centre-right government which said face veils were contrary to Danish values.

Opponents say the ban, that comes into effect on Aug, 1 infringes women’s right to dress as they choose.

Justice Minister Soren Pape Poulsen said police would not order offenders to remove their veils, but would fine them and tell them to go home.

France, Belgium, the Netherlands, Bulgaria and the German state of Bavaria have all imposed some restrictions on full-face veils in public places.

Justice Minister Pape Poulsen, head of the conservative party in a government backed by the nationalist Danish People’s Party, said when the bill was proposed in February: “It is incompatible with the values of the Danish society or the respect for the community to keep the face hidden when meeting each other in the public space.”

ALSO READ: ‘Why we choose to wear – or not wear – the hijab in today’s society’

Zainab Ibn Hssain, who lives in Copenhagen and has been wearing the niqab for the last year, told Reuters: “It’s not nice. It will mean that I won’t be able to go to school, go to work or go out with my family.

“But I won’t take my niqab off so I have to find another solution,” the 20-year-old added.

“All women should be free to dress as they please and to wear clothing that expresses their identity or beliefs,” Amnesty said.

$1bn Excess crude account: Buhari should not use it for 2019 politics ―Ahmed

Denmark charges 14 over sharing video of student killing in Morocco