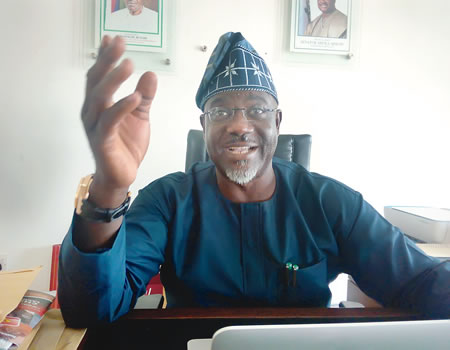 Oyo State Commissioner for Information, Mr Toye Arulogun, in this interview, held before the Thursday evening peace meeting, speaks on the controversies generated by the demolition, last Sunday, of the Music House, the building housing Fresh FM, the radio station of the Ibadan-based Gospel musician, Dr Yinka Ayefele.

The last one week has been very tough for your government over the demolition of Ayefele’s Music House. Is the government regretting the action?

Thank you for putting the question appropriately. I wish to reiterate that the Oyo State Government embarked upon a partial demolition of Music House, not Fresh FM. The offending party is the structure named Music House. Now, to your question: One of my favourite quotations is by the former British Prime Minister, Tony Blair and it says “The art of leadership is saying No, not saying Yes. It is very easy to say Yes” I am also a past president of the Junior Chamber International, specifically JCI Ikoyi. A part of the JCI Creed says “…That government should be of laws rather than of men…” The Oyo State Government took the decision in accordance to the state planning laws, after due process and in public interest.  Let me add that it is, however, unfortunate that after a series of engagements by the Oyo State Government with the owners of music house, a partial demolition of the Music House had to be done. To my mind, it was self-inflicted. From what I have said, I believe you can deduce government’s position. More importantly, what is popular does not have to be always right and what is right does not have to be always popular.

Your government has condoned that building for almost eight years, why the demolition now?

There is never a wrong time to do the right thing. The key question is whether the structure contravened planning laws or not. The answer is yes. Secondly, did government follow due process? The answer is yes. Government has a duty, just like any individual or organisation, not to live with its mistakes but to correct it. It would have been unforgivable if government did not repossess its land upon which Music House had encroached, having overshot the dimension of the land area in its survey plan, deviated from the approved building plan and clearly constituting a source of present and imminent danger.

The opposition is with Ayefele. Don’t you think you have given them fuel to cook you?

Your governor was at the station two years ago where he said he was asked to demolish the building for political reasons. You don’t think that same mindset informed this demolition?

Citing political reasons is cheap blackmail. When the governor visited the station, I was not there, but I have listened to the widely circulated audio. Did the governor go there on a site inspection? The governor’s statement in the audio commended the interior of the station. If he is magnanimous, liberal and open-minded not to demolish it for political reasons two years ago, you should respect him and commend him. Today, we are talking of physical planning and development control violations which is general to development in the state by a government which is the first to introduce a master plan for controlled physical development by a governor who is the builder of modern Oyo State. Petitions have also been received by the government complaining about the accident-prone nature of the location and vicinity of Music House.

My point is that we must make up our mind as a people whether we want development or not and be ready to pay the sacrifice. Many highly placed individuals and corporate organisations like the governor’s in-law, Chief Kola Daisi, whose buildings at Challenge and Idi Ape were affected have paid the price.  Same for the Aare Musulumi of Yorubaland, Edo and Delta states at Iwo Road where his petrol station was affected. Let me also remind you that Chief Eniade, a leader of the Oyo State APC had his house demolished in Bashorun at a time when his son was the sitting Head of Service. BCOS was affected and Ibadan South West Local Government had its shops demolished too. The State Executive Council members swore an oath of allegiance to the state and the people of Oyo State by which they are guided. This government does not believe in sacred cows.

What advice do you have for Ayefele at this point?

I almost dumped music for boxing ― Willie XO opens up