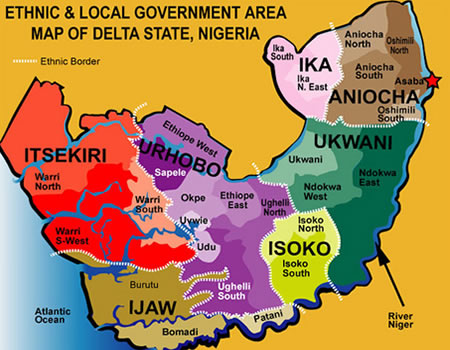 The victims, one of whom was said to be a member of the Ugborodo Interim Management Committee (IMC) newly constituted by the state government to restore peace to the community, were identified as Benson Okoturo and Samuel Mayomi.

They were waylaid while on board a boat with other members and indigenes to a meeting in the volatile community which hosts oil giant, Chevron Nigeria Ltd (CNL) on Tuesday.

Benson Okoturo allegedly died of shock from sporadic gunshots while Mayomi was said to have drowned among other passengers after their boat was intercepted by another boat whose passengers were armed youths.

The armed Ugborodo youths were said to have also abducted and tortured five other victims during the ill-fated trip.

The Nigerian Navy in Delta State was said to have effected the release of the abducted victims.

TribuneOnline gathered that the victims were billed to attend an IMC meeting at the instance of the Eghare-Aja (Chairman, Elders Council) of Ugborodo, Pa Wellington Ojoghor.

The meeting was to comprise the 52 members of the IMC which was inaugurated by the Delta State government to restore a lasting peace to the community which has been embroiled with leadership struggle.

A member of the IMC, Alex Eyengho, who related his experience with journalists, urged the government to militarize Ugborodo to avert further loss of lives and threats to oil and gas assets.

Narrating his experience, Eyengho, a media expert, said “We formally applied to the Delta State Police Command who gave us about a 100-man police team led by Superintendent Sola Adebayor.

“Shockingly, these security operatives watch like spectators as the armed men intercepted us between Kpokpor and Madangho.

“They told the police they won’t allow us to come down to convene the meeting. They openly fired their guns in the air in the presence of the police.

“In presence of the police they rammed one of their boats into one of our boats which sank and resulted in drowning of Mayoma.

“They were wielding guns and other dangerous weapons, and Superintendent Adebayor’s only response was that they have no mandate to use extreme force, advising us to retreat.

“The police complacency gave the criminals liberty to also abduct five of us, tortured them mercilessly before releasing them through navy.

“They want the community to remain inaccessible to protect their oil crimes. It is difficult to explain that with a naval base and army post in the area, these criminals still enjoy impunity to steal oil, kill and destroy.”

Eyengho stressed that the loss of two lives in the incident would find justice.

According to him, “It is like Federal Government is only interested in protecting oil assets in the area and leaving the host community live at the perils of the criminals.

“Chevron’s divide and rule too in aggravating the matter. We are aware they still gratify these criminals after having accepted the government recognized IMC.

“I am calling for total militarization of the community. Government should proscribe or re-proscribe youth activism in Delta state. Ibori instituted a law to that effect, but successive governments
seem to have failed in implement same.

“Government and security operatives cannot allow Ugborodo to be made Hobbesian by criminals who are not faceless.”

It will be recalled that some residents opposed to the constitution of the IMC, had, on Monday, in a separate statement signed by Pa John Atigbe (Okwu of Ugborodo) and Pa Blackie Joe (Acting Olare-Aja), had warned against the planned meeting, which it described could be fatal if held.

The Spiritual Head of Ugborodo, Benson Omadeli, told journalists on phone that he was not on ground when the Tuesdayincident happened.

Meanwhile, the Delta State Commissioner of Police Zana Ibrahim, could not be reached, but the Commander, Nigerian Navy Ship (NNS) Delta, in Warri, Commodore Ibrahim Dewu, said he was not privy to the lives lost in the incident, but only for the clash.

“I’m just coming from the security council meeting so I don’t really know the outcome of everything.

“I don’t know about the people who lost their lives. I only heard about it from the
DSS Director who was briefing, but I know that in the community, a group was coming to gain access, another group stopped them.

“I don’t have the full details, but I know there was problem yesterday (Tuesday).”