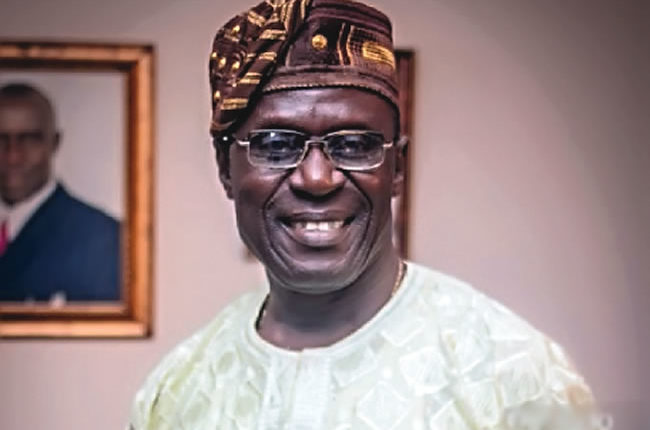 A former governorship candidate of the Labour Party (LP) in Lagos State, Dr Rotimi Olulana, in this interview by BOLA BADMUS, speaks on some issues of national importance, including restructuring, 2023 general election and Senator Bola Tinubu’s presidential ambition.

With the year 2023 drawing near, there are agitations surrounding the prospect of the next general election, one of which the issue of restructuring. What do you make of this?

I think what we need in Nigeria now is to say the truth, stand by the truth, work towards the truth and put sentiments away. We must work towards restructuring the country. I believe there must be restructuring of the political system of this country. If the present government refuses to revisit the last government’s restructuring agenda, where there was a conference that came out with resolutions, which are supposed to have been put on the table and looked into, it means we are not committed to moving the country forward. If there are ways to make little amendments, let us make them and work with those resolutions.

But if this government refuses to do that, they should come up with their own restructuring agenda because there are agitations everywhere. There is no way you can sweep these agitations under the carpet otherwise we are postponing the evil day. So, I am placing my belief and trust in the restructuring of the country. That is where I stand.

I cannot know the mind of others but I will look at the technical points that matter. But presently, there is the problem of kidnapping everywhere. There is the issue of herdsmen not allowing farmers to farm again, which is partly where the problem of kidnapping started from. Then you look at the activities of Boko Haram in the North. Some people are even saying that the presidency has to be zoned. All these are happening because we don’t trust one another. If we trust one another, we don’t need all these sentiments. We don’t need religion or zoning to determine somebody who is willing and ready to sacrifice his time and energy to bring change into the system.

So, let us look inwards and see where we made mistakes and then make amends. And how can the North produce the president first time, second time, third time, fourth time and fifth time? It cannot augur well because we are not speaking the same language. If we are in unison, whoever is in power, our prayer should be for the person to go in the right direction. What stops me from supporting a Northerner for president? What stops me from supporting an Igbo man to become the president of Nigeria as long as he is doing the right thing, as long as he sees every constituency as his own? But right now, that is not happening and that is why we need restructuring. With restructuring, we will be able to say okay, if you are the president, these are the rules that you must follow. If you go contrary to our agreement, it means you will no more enjoy the leadership of the country because you will be impeached. If all these things are stated clearly in our constitution, we would enjoy some respect in the comity of nations. And then before you become our president, we want to know who you are, what you are. This is because you now see everyone getting into positions and becoming multi-billionaires, if not trillionaires. The majority of the people are wallowing in abject poverty while a few people in government are living in affluence. This is not right.

Part of restructuring should be to look at the members of the parliament and ensure that they are only paid sitting allowances and not these huge salaries they are currently receiving. The members of parliament are living like lords today. I don’t think it is necessary to be paying them salaries; it should be just sitting allowance. If you are not interested, then don’t go there.

Again, we should know how to disabuse the minds of Nigerians because this thing has to do with serving God. People don’t have fear of God any longer and that is why we have all these enormous problems on our hands. Economically, we are zero. If you look at the value of our currency, compared to other currencies, you will see that we are zero.

But if Nigerians are able to elect a good president in 2023, irrespective of where he comes from, don’t you think such a person can be able to put Nigeria back on track, even without restructuring?

I doubt if that is possible, looking at our present situation. We have only two political parties that are really ruling Nigeria. Those are the APC and the PDP. The PDP frustrated us and we requested for a change. The change was what brought the APC to power. I want to ask: are we not more frustrated today than we ever were? You saw the kind of life the PDP government people lived, how everybody went haywire and took away the resources of the country as their own personal belongings. The result is the zero level that we have found ourselves.

Many of us felt that we had found somebody we could trust, a disciplined soldier. We knew how things were handled during his military regime, whereas most of us had forgotten that it was Tunde Idiagbon who was really at the helm of affairs during the military regime of [Muhammadu] Buhari. Today, can we confidently say that we are satisfied? The whole country is suffering.

So, what is the point if all we still have are these two political parties? Another thing is that most of the people that were in the PDP are now in the APC. The APC is not the same party that brought Buhari to power. It has imported many PDP powers. So, the whole thing stands to be the same. If we have another opportunity to have a new set of leaders, we should go for people who have been in the business world, in the corporate world, professionals, people in the academic world. We need a good political party that could stand the test of time but such a political party is not emerging now. I was hoping that such a political party should come forth at this point in time.

But some people are already putting heads together for that.

Well, if we can have such, and if they can have their way, I would prefer that. I can look in that direction and say let us have a new set of people, a new orientation because, to me, the system is messed up. I don’t trust anybody who is a member of the APC or the PDP. I don’t see any good person belonging to either of the two political parties.

It is not that Nigerians don’t know the right people to vote for but they are tired of the APC or the PDP. That is the point. Before you know it, these people in these two major political parties will take over the whole place. So, there supposed to be a kind of reorientation for the people. What I am saying in a nutshell is there is the need to build the minds of Nigerians to understand the situation that we are facing. There is the need for us to build a new block and change the way we play politics in Nigeria. They know and understand themselves. Anyone that is not part of their system would be flushed out because they have the entire resources of state in their pockets. They are the ones determining who becomes what; who becomes ministers, senators, members of the parliament. Without you going through these people, you cannot get to such positions.

The North is still scrambling to retain presidency. The South is saying no; it is its turn. Even in the South, the Igbo are saying it is their turn, just as Senator Bola Tinubu is being touted as the best candidate for the job. Where do you stand on all this?

The truth is that he (Tinubu) has done enough to become the president of Nigeria and I will not say no to his candidature and I will tell you why. Asiwaju has done so much for the country. Asiwaju was the one that championed the cause of Buhari coming to power. Even Buhari had decided not to contest the office any longer; he had said that he was not interested in ruling the country anymore, that he had done his best; that he had decided to go and relax. Nigerians were agitating for good leadership and Asiwaju was able to come up with the idea of working to bring Buhari to power. Buhari was not in his party, the defunct ACN, but Asiwaju decided to go for him because he knew Nigerians would want to have a person of his caliber, a person they believed was honest and committed to the advancement of the country. That was what Asiwaju believed and he worked tirelessly for it. He moved round the country.

The body language of Mr President is saying that herdsmen should continue to kill. Lots of things have happened. It is during Buhari’s administration that that ranking military officers like Generals are killed and nothing happens. How can a General be killed by ISWAP and nothing happens to ISWAP afterwards? It is very unfortunate. In the whole of Africa, the Nigerian Army is the best and this is known everywhere in the world but today, we are at zero level if Generals are getting killed the way they are now.

My husband beats me, starves me of food, woman tells court