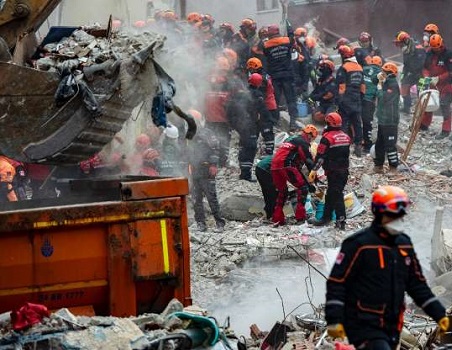 The death toll from the collapse of an Istanbul apartment block rose to 10 on Thursday as more bodies were pulled from the rubble, Turkish authorities said.

The eight-storey building, which is located in the Kartal district on the Asian side of the city, collapsed on Wednesday but the cause is not yet clear.

Rescuers had initially put the death toll at two, but Istanbul governor Ali Yerlikaya said on Thursday the figure had rose to 10 as more bodies were pulled from the rubble, MSN reported.

Another 13 people were injured, three of them seriously, he said.

As rescuers worked through the mountain of shattered concrete and twisted metal, which also crushed several nearby vehicles, they found a survivor on Thursday a five-year-old girl.

She was taken to hospital but her condition was not immediately clear.

It was not immediately clear how many people were in the building when it collapsed, although 43 people were registered as living there in 14 separate apartments, Anadolu said.

Surveillance camera footage of the moment of collapse which was shown on Turkish television showed people fleeing in terror as the building disintegrated, leaving a huge cloud of dust.

Media reports said three of the eight floors had been illegally built in what is a relatively common practice in this metropolis of some 15 million.

Speaking to NTV news channel, several survivors said the building, which was riddled with cracks, had seemed to sway earlier in the day.

The incident was a stark reminder of the fragility of parts of Istanbul’s residential infrastructure, with several buildings collapsing in recent years.

One four-storey structure crumbled last year following violent thunderstorms and in January 2017, two people died when another building collapsed in a working-class part of town.

Plane skids off runway in Istanbul, breaks into three