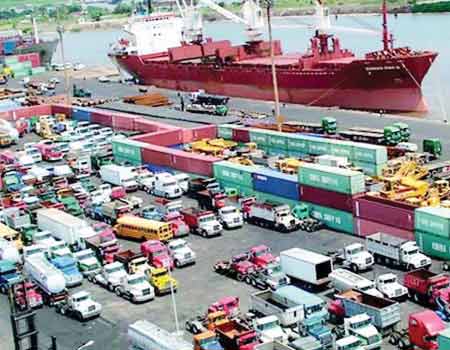 Economic and port activities of the Tin-Can Island Port of the Nigerian Ports Authority (NPA) was on Thursday disrupted as a yet to be identified Police officer was said to have shot a truck owner simply identified as Alhaji Dan Jos.

This, however, led to a protest as members of the Road Transport Employee Association of Nigeria (RTEAN), Tin Can Chapter took to the streets to voice their pain.

The police officer is said to be attached to the RoRo division of the Nigerian Police force.

According to an eyewitness report, the police officer shot Alhaji Dan Jos after he was challenged for urinating on a truck parked in the garage along the Apapa-Oshodi express road.

Kabiru Alaba, a truck driver who said Dan Jos was his colleague, note that “after the policeman was challenged by Dan Jos, he called his colleagues who came from the RoRo division with a rifle which he used to shoot him.

“The police officer was urinating on one of our trucks when Alhaji challenged him, this later led to an altercation and he called his colleague from the division who came and shot Alhaji on the thigh.”

Confirming the rift to our correspondent, the RTEAN Chairman, Tin-Can Chapter, Isiaka Olalere said that one of his members, Alhaji Dan Jos was shot on the thigh.

“I have just been told now that one of my members has been shot by a police officer. I am going to the garage to put everything under control,” Olalere stated.

When contacted, the Public Relations Officer of the Maritime Guard Command, ASP Sadik Olatunde said he was not aware of the crisis at the port. He, however, said he would get across to the Divisional Police Officer to ensure stability of law and order.

When Nigerian Tribune passed through the first gate axis of the Tin-Can Island Port, port users were seen moving in a long cordoned off path with massive numbers of mobile policemen ensuring there is no further breakdown of law and order.

Audio: President Buhari thanks Nigerians, pledges to rededicate self to protect their interests

One feared killed as miscreants, task force clash in Apapa

Police officer, 40 others arrested for dumping refuse on Osun roads