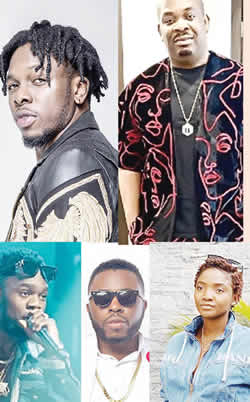 As Nigerians continue to lament the biting condition of living occasioned by the ravaging COVID-19 pandemic, popular entertainers whose sources of livelihood are also being threatened have asked the Federal Government to save Nigerians from imminent hunger.

With states already putting precautionary measures in place which would further force many citizens to stay indoors, entertainers are lamenting the plight of many Nigerians who, according to them, may die of hunger and starvation if palliative measures are not provided.

With the wherewithal to help people, some entertainment celebrities decided to splash the cash in order to help people who claim to be facing hardship due to the economic restrictions imposed across the country.

Even those who were not subscribers to the pages of many Nigerian celebrities decided to follow them on social media in order to be part of the largesse.

Popular singer Runtown, who through his verified twitter account said he realised times were very hard for many Nigerians, promised to give out N10 million to Nigerians who may want to stock up on survival essentials.

While asking the government to rise to the occasion and listen to the yearnings of the people whose condition of living would get poorer with the shutdown of activities across states, the Mad Over You crooner urged his fans to keep hoping for the best and work hard to meet the demands of the time.

As of the time of filing this report, it was gathered that Runtown was still making transfer of funds to different bank accounts provided by people on his timeline with many praying for the singer and calling on his colleagues to do same.

For famous music producer and founder of Mavin Records, Don Jazzy, the deluge of messages he receives daily from Nigerians who are currently facing untold hardship has forced him to speak out against the poor state of the nation amid the pandemic coronavirus.

Don Jazzy, in a series of tweets, said he felt so sad seeing what many people are going through in Nigeria even as government across all levels appeared helpless, adding that while he has not set out to bash or knock the government, “scrolling through my mentions gets me so sad. I am in real tears. Account numbers everywhere and I can’t blame them because if they have enough, they won’t ask.

“This is not even a tweet to bash the government. I really want to know how our lives can be better. Where do we start from?” he asked.

Heal The World singer, Patoranking says hunger and starvation will kill more Nigerians than the rampaging COVID-19 if the Federal Government fails to lift the people out of poverty by providing palliative measures ahead of the imminent lockdown of the country.

He appealed to President Muhammadu Buhari to make life more comfortable for the citizens, adding that locking down the country and shutting down of business will further impoverish the people.

In his tweet that generated 600 comments and over 1500 retweets and 7000 likes, Pato, as he’s fondly called, appealed personally to the president, saying “Hard times for everyone sir @MBuhari. Please Your Excellency help us Sir. Hunger and starvation would kill people faster than the virus sir. Let’s assume we are starting the country afresh. Please sir, I beg you in the name of God”, he tweeted.

Reacting to the measure being put in place to tackle the menace, singer, Simi, blames government for its failure to provide adequate healthcare system that could sufficiently tackle the pandemic virus.

The singer, who is one of the artistes making donations to cushion the effect the restriction of movement is having on Nigerians following the outbreak of the coronavirus pandemic, says government has not made the healthcare what it should be, hence the panic among the people. “Government has not created a health care system that is capable of taking care of you if it goes out of control. Love yourself if your government is not capable of loving you,” she said.