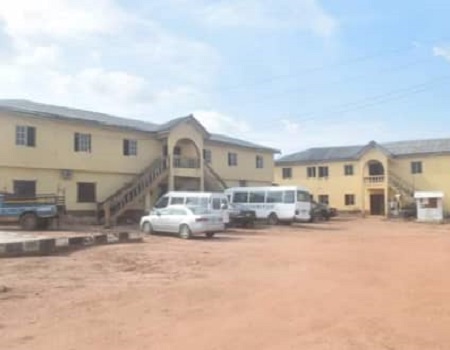 THE national leadership of the National Association of Nigerian Students has threatened a showdown with the Royal Institute of Health Technology in Ifo, Ogun State for allegedly violating the Federal and Ogun State governments’ order on the closure of schools.

In a swift reaction, however, the management of the Institute has debunked claims by NANS that the Monotechnic has been reopened to students in contravention of the Federal government order closing down all schools to prevent the spread of coronavirus in the country.

NANS had in a statement by its National Secretary General Comrade Umar Faruk in Abuja on Friday said, it received a letter of complaint from the National Association of Ogun State Students (NAOSS) that the Institute reopened its campus and recalled students for deployment for Siwes programme.

A development which according to NANS is not only “reckless but also criminal.”

The students’ umbrella body in Nigeria said immediately it received the letter, “the allegation was investigated and found to be true.”

NANS condemned the “recklessness” of the management of the Institute, describing it as the height of lawlessness and deliberate mission to sabotage the unrelenting efforts of govt at all levels in fighting the novel coronavirus pandemic.

The student body, therefore, called for the immediate arrest and prosecution of the proprietor to serve as a deterrent to other people who might be planning to commit the same criminal act.

“We demand the immediate arrest and prosecution of this lawless fellow who is the proprietor of the Institute.

“He has not only violated the Federal and Ogun State governments’ lockdown order but he has also exposed his students to the danger of COVID-19.

“We are also prepared to mobilise all our members across the country and shut down the premises of the said school to prove to people that Nigeria is not a lawless country,” Faruk said.

When contacted on the telephone the Proprietor of the Institute, Dr Daniel Adesanya, told Saturday Tribune that the allegations from NANS were baseless and from the truth, saying the Institute has never been reopened for students to resume academic activities on campus.

He explained that what the Institute has done was to introduced online learning platform for students to continue with the academic activities virtually pending the reopening of schools by the Federal and Ogun State Governments.

Adesanya, also revealed that the Institute also got the approval of the Ogun State Government through the Hospital Management Board for the deployment of the final year students on Students Industrial Work Experience Scheme (SIWESS), to hospitals for them to have practical experience on management of COVID-19.

Some of the students deployed by the Ogun State Hospitals Management Board for the SIWESS, in a letter with reference No. DMLS/SHB/92 and signed by Olujimi S.O, which was sighted by our Reporter, were posted to the State Hospital, Ijaye, General Hospital, Ifo and State Hospital, Ota.

The letter entitled, “Re-Laboratory Posting for Medical Laboratory Technicians Student” read: “I am hereby directed to inform you that Medical Laboratory Students from Royal Institute of Health Technology has been posted to your hospital for 3 months for their Laboratory Practical which will commence 15th June 2020 to 28th August 2020.

“I hereby attach list and names of students coming to your institution.”

Adesanya further explained that immediately the index case of COVID-19 was recorded in Ogun State, he had sent all the students home except the 300 Level students who were retained but were also sent home following the directive of the Federal Government to shut down all schools across the country.

“By the time the Federal Government had given the directive all 100 Level and 200 Level students had left the school. It was only the 300 Level that we now sent away based on the directive of the government and up till now no single student has been coming for a lecture, except online lecture that we do,” he said.

He added that following the ease of the lockdown, lecturers have now resumed in school but all lectures and management meetings still virtually in compliance with the physical and social distancing COVID-19 protocol.

EDITORIAL: Defence Minister’s Lamentation
THE Minister of Defence, Bashir Magashi, has lamented that Nigeria’s military is too understaffed and underfunded to tackle the various security challenges facing the country. He made this lamentation while briefing journalists after a Federal Executive Council (FEC) meeting where he said he had made a presentation on… NANS Ogun NANS Ogun NANS Ogun NANS OgunRead full story