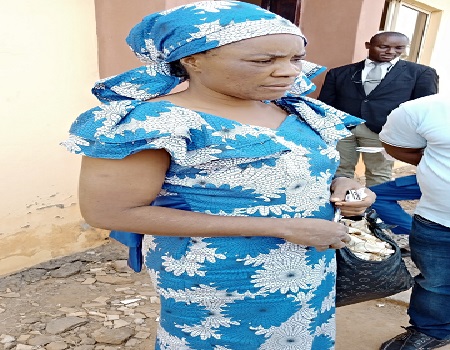 A 47-year-old woman Zainab Suleiman, on Wednesday, appeared before an Akure Magistrate Court for allegedly maltreating her 12-year -old niece, inflicting injuries on the body of the little girl, Victoria Williams.

Suleiman who was an aunt to the little Victoria was ordered to be remanded in prison custody by Magistrate Olufunke Adegoroye till February 11, 2020.

The accused was alleged to have flogged the minor in a bid to discipline her, inflicting injuries on the body of the minor girl, thereby causing bodily pains and bleeding while the young girl was ordered to seek medical attention at the hospital.

She was alleged to have used her fingernails and horsewhip to cause deep wounds on the body of the 12-year-old Victoria, which was reported to the State Police Command by the officials of Nigerian Immigration Service on the 31st January 2020.

The charge sheet read, “that you Zainab Suleiman on the 31 January 2020 at Oke-Odu via Ipinsa, Akure did unlawfully assault one Victoria Williams aged 12 year old by using your fingernails to inflict injuries all over her body and thereby committed an offence contrary to and punishable under section 355 of the criminal code cap 37 vol 1 laws of Ondo state of Nigerian 2006.

“That you Zainab Suleiman, on the same date and place did injure one Victoria Williams by causing her deep wound on her body and thereby committed an offence contrary to and punishable under section 338 of the criminal code cap 37 vol 1 laws of Ondo state of Nigerian 2006.”

The mother of three who lost her three children however, pleaded not guilty to the two counts.

Prosecuting counsel, Ajiboye Babatunde, prayed the court to adjourn the suit, informing the Court that six witnesses would be presented by him to testify against the accused.

In her ruling, Magistrate Olufunke Adegoroye, however, ordered the remand of the accused person till February 11, 2020.

She ruled that the case should be transferred to the family court since it involves a minor, while the young girl should be taken to juvenile home after being given medical attention.

The accused who is the aunt to the young girl was fond of assaulting her with her fingernails and horsewhips, which caused bodily harm on her.

The accused who said she lost her three children and decided to take custody of her junior sister’s daughter admitted beating the young girl but said it was a mistake.

She said “It was a mistake. I can not pinpoint exactly what she did wrong. She has been living with me since 2017. I enrolled her in a very good school and I trained her very well.

“We always read together and I do assist her in school homework. What actually led to the beating was when I noticed that she has not been taking notes in school and the school was preparing for a test.

“I queried her but she refused to answer me. Also, I saw a book that used to be 40 leaves which have been shredded to 8 leaves in her bag. I asked her where she got it from, she said one of her classmates gave it to her. I was not convinced with her response so I went to her school where the student denied giving her any book.

“She is my niece. Her mother lives in Kogi State. I was the one who pleaded with her mother to release her to me so that she can be living with me here in Akure. I gave birth to three children but they are all dead.

However, the young Victoria, a primary five student of a private school, said her aunt used to beat her on a daily basis with a horsewhip and by using her nails

The 12-year old girl said, “It all started on a particular day when she accused me wrongly of eating one of the fish she sent me to buy whereas the fish mistakenly fell on the road.

“She didn’t touch me until the third day when she beat me with a horsewhip and also used her fingernails to cut my body.

“So, anytime I didn’t finish the house chores on time or I could not solve my school homework she will use her fingernails and horsewhip to inflict injury on my body”

Afe Babalola, Soyinka, others to speak at VOR lecture