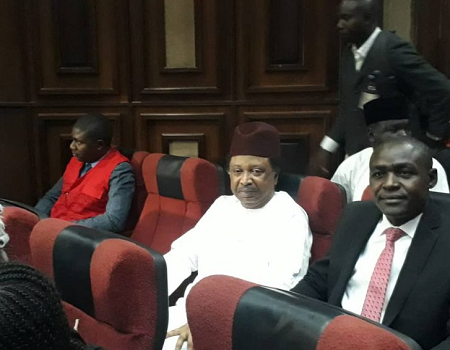 Sani, who was arraigned by the Economic and Financial Crimes Commission (EFCC), prosecuting him on behalf of the federal government pleaded not guilty to the two-count charges when they were read out to him in the court.

The former senator was accused in count one that he, “on November 20, 2019, within the jurisdiction of the court, with intent to defraud, obtained the sum of $15, 000 cash from Alhaji Sani Dauda (ASD), under the false pretence that the money was meant to bribe four judges and a prosecutor, pursuant to your discussion with the Chief Justice of Nigeria (CJN), during which he informed you that he has directed four judges not to hear any case between Alhaji Sani Dauda and Abubakar Musa, which representation you know to be false, contrary to, and punishable under Section 1(1) and (3) of the Advance Fee Fraud and other Fraud related Offence Act No. 14 of 2006.”

He was also accused in count two of obtaining the sum of $10, 000 cash from Alhaji Sani Dauda under the false pretence that the money was meant to bribe the Acting Chairman of the EFCC, Mr Ibrahim Magu.

Sani denied all the charges preferred against him and his counsel, Abdul Ibrahim (SAN), moved an application for his bail on liberal terms.

The senior counsel told the court that the former Senator is a responsible married man with kids, that he will not do anything capable of disrupting investigation by the EFCC and that he is ready to present reasonable persons as sureties to ensure his attendance at trial.

In the 15-paragraph affidavit accompanying the bail application, one Suleiman Ahmed, an aide to Sani, averred that, on January 9, the former Senator was subjected to a biometric test, which he complied with but declined to lift up a billboard for the officers to snap him, to tarnish his political career.

He said Sani, if granted bail, can adequately prepare for his defence, while also catering for his family and business, just as he said that the offences for which the former lawmaker was charged do not attract capital punishment.

Opposing the bail application, prosecution counsel, Abba Mohammed, urged the court to deny the former lawmaker bail on the grounds that he will jump bail.

He told the court in a six-paragraph affidavit that Sani had, several times refused to honour the invitation of the anti-graft agency during the investigation and that, there is the tendency of him jumping bail if granted.

The prosecution indicated that 14 witnesses would be called in the matter to prove its case against the former lawmaker.

After listening to submissions of counsel on the bail application, the trial judge, Justice Inyang Ekwo admitted Sani to bail in the sum of N10 million and a surety in likes sum.

Other bail conditions are that, Sani should deposit his international passport with the court and must not travel outside the country without the permission of the court.

Ekwo said Sani should remain in the custody of the anti-graft agency pending when the bail conditions are met and adjourned till February 24, 2020, for the commencement of trial, which he said will be conducted peaceful and orderly.