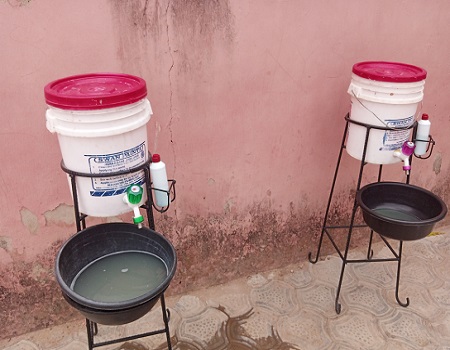 Following the directives given by the Bauchi State government, most public and private schools have started providing handwashing services to the pupils and students.

Our correspondent who went round Bauchi metropolis to monitor the situation found out that most of the schools particularly the private schools have provided handwashing points at strategic locations within the school premises.

While at LYS Academy, two handwashing points have been established to serve the pupils in the Basic section and students in the secondary school section as well as some of the parents who may want to wash their hands.

Head of the Academy, Blaise explained that even though the school has been practising the system before the directive from the government, efforts have been intensified to ensure that the community get used to the new development.

He added that all the materials needed have been provided at the various points while some of the teachers have been assigned to monitor the point to make sure that it was not abused by the users.

At the Baptist Royal Academy, washing point has been established where the students and pupils go to wash their hands with soap made available while a staff has been stationed to guide them.

One of the teachers who spoke on behalf of the School explained that immediately the received the directives, it quickly swung into action because according to him, every necessary action must be taken to protect the children from infectious diseases.

While at the Sunshine International School, the school management said that it has since provided the washing points and equip them with the relevant materials required.

However, the visit to some of the public schools revealed that they have not started implementing the directive because of non-availability of funds for the purchase of the items needed for the exercise.

In one of the schools, Bakari Dukku Model School, one of the teachers who pleaded anonymity disclosed that the Ministry of Education was yet to give them the funds to procure the items but said that for now the students have been advised to use the available water in the school to wash their hands.