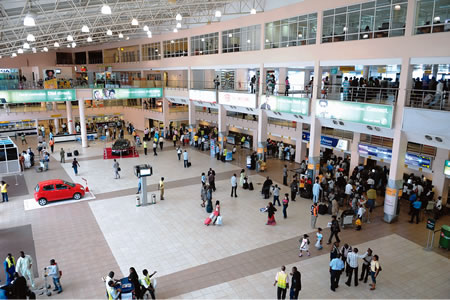 AS controversy continues to trail the diversion of flights by foreign airlines to neighbouring countries of Accra, Ghana, Benin Republic and other nearest airports due to inclement weather around the Murtala Muhammed International Airport, stakeholders are asking questions about the status of the landing aids at the number one gateway.

This is just as travellers have continued to lament the moral and financial losses the flight diversions are causing them.

Owing to the negative effect of the bad weather, the likes of British Airways, Delta and Emirates have diverted their flights to Accra in Ghana while Ethiopian Airlines has diverted its flights to Abuja, Qatar Airways has since requested and granted approval to divert its Lagos flights to Nnamdi Azikwe International Airport, Abuja.

While reasons traced to the flight diversion has been attributed to adverse weather and operational constraints, many passengers have condemned how the diversion of flights  have brought untold hardship on them as the airlines have been offloading them and their baggage in Accra and other neighbouring airports instead of Lagos.

The minister of aviation, Senator Hadi Sirika, in reacting to the development, had expressed concern about the discomfort being experienced by air travellers into and out of the Lagos airport due to flight diversions and in some cases flight cancellations, which he confirmed had been due to inclement weather conditions.

In his reaction, the Managing Director of Centurion Security and Safety Services and a onetime military commandant of the Lagos airport, Group Captain John Ojikutu (retired), queried the status of the landing aids at the airport.

“What are precisely the equipments available now as landing aids at MMA? What has happened to the category two ILS there, if it has been replaced by category three? What is the status, because even in 500m visibility, aircraft can still land with it?

NCAA should be asking these questions to assure the international aviation communities and authorities that we are adhering to the global standards on oversight and enforcement on safety services providers. NAMA too should openly come out and let the airline operators know what challenges to their functions are there. The world is watching.”

The Nigerian Civil Aviation Authority (NCAA) has already appealed to passengers for their understanding over the prevailing flight delays and cancellations experienced in airports across the country due to the adverse weather situation.

The prevailing inclement weather according to the NCAA is a global experience at the moment which had warranted cancellation of in-bound international flights alike; therefore, not peculiar to Nigeria.