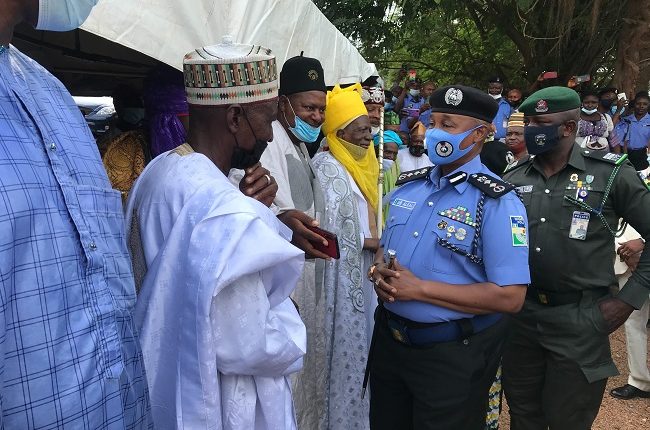 Inspector-General of Police (IGP), Usman Baba Alkali, has charged officers and men of the Oyo State Police Command to collaborate and work in synergy with other security agencies, in order to tackle crime in the state.

The IGP stated gave the charge on Wednesday while addressing officers and men during a visit to the command headquarters, Eleyele, Ibadan.

The police chief specifically urged divisional police officers (DPOs) to liaise with security agencies in their localities, as well as agencies responsible for administering or tackling specific situations, in order to solve certain issues.

The IGP said: “If you are talking about aliens, for example, the Nigeria Immigration Service is responsible for this, and you can support the immigration to ensure that illegal alien issues are tackled.

“Therefore, the essence of this is that while other agencies need you, you also need them.”
Alkali also charged police personnel to focus on intelligence-driven policing, which he said would be easier than going on rescue operations.

He stressed that it would be much better to arrest a suspected kidnapper before he would carry out the crime of kidnapping than going on rescue mission, which might be risky.

He added that the synergy with other security agencies would enable residents of the state to sleep with their two eyes closed.

Commending personnel of the command for the good job they had been doing, the IGP said that part of the reason for his visit was to hear first-hand the challenges the command had been facing, and also learn one or two things on how to do things better.

Earlier, the Commissioner of Police in the state, Ngozi Onadeko, thanked the IGP for the visit to the command.

She said that she assumed duty at a period when the morale of officers and men of the command were at the lowest ebb following the #EndSARS protest, just as she added that the police had taken the front seat in matters of internal security in the state and had been able to reduce crime rate to the barest minimum.

The CP said, “though the challenge of manpower and operational vehicles is not peculiar to the command, I, however, crave your indulgence to help return the mobile units of the 4 PMF, Ibadan and 42 PMF, Ago Are, that are on national assignments outside the state and also the deployment more manpower to the state.

“This is necessary as more units of PMF are still being detailed for national assignments from time to time outside the state, while other units deployed to the state by the IGP have recently been withdrawn.

“While the state has continued to experience an influx of people and businesses, and in the face of activities of agitators of Oodua Republic, farmers-herders clashes, there is need for urgent deployment of adequate personnel in order to stem their escalation.