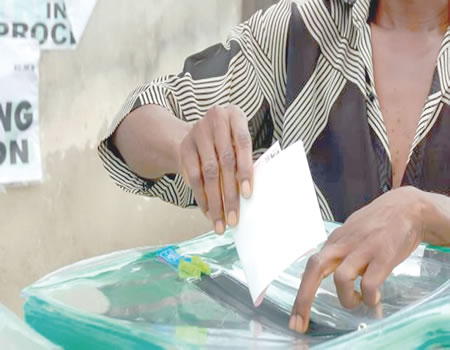 The Coalition of Civil Society Election Observers Group on Thursday in Lagos called on the Independent National Election Commission (INEC) to cancel the results of the November 16 governorship election held in Bayelsa and order for a fresh exercise, declaring that the result of the election did not represent the aspirations of the genuine voters of the state.

Chairman of the coalition, which consisted of 16 groups, Mr Olufemi Lawson, made the call at a news conference which took place at Ogba area of the state, maintaining that the exercise was rocked by violence, vote snatching and disruption of collation process which the massive security presence on ground could not arrest.

INEC had, following the conclusion of the election, declared David Lyon of the All Progressives Congress (APC) winner, with 352,552 votes, while his closest rival and candidate of Peoples Democratic Party (PDP), Sen.Duoye Diri polled 143,172 votes.

Lawson said the result should not be allowed to stand as it did not reflect the choice of Bayelsans.

Besides calling for cancellation of the result, Lawson, who lamented that not a single perpetrator or sponsor of the violence which characterised the exercise had been arrested up till the present moment despite the huge damages, including the loss of lives experienced, also called on the international community in particular to consider appropriate sanctions, including visa ban on perpetrators of election violence and their sponsors.

“We are also calling on all partners, particularly the international community in particular to consider appropriate sanctions, including visa ban on perpetrators of election violence and their sponsors,” he said.

“We are sad that till this moment, not a single perpetrator or sponsor of the violence which characterised the election has been arrested, despite the huge damages, including the loss of lives experienced,” he lamented.

Speaking on the Bayelsa polls, Lawson said the irregularities witnessed during the exercise led to many residents being disenfranchised, besides the flooding that was recorded in some communities in the state during the period.

According to him, notwithstanding the encumbrances occasioned by the flooding, votes returned from the affected areas were more than the number that was recorded in an earlier poll exercise that took place in those areas when there was no flooding.

“There were widespread incidents of vote-buying across the state, with a systematic approach by politicians aided by security agents, particularly the police. These occurred in about 60per cent of the polling stations where we observed in the state.

“The large presence of security officials did not deter thugs from instigating and perpetrating violence. We witnessed politicians came to polling stations with masked thugs who instantly snatched the ballot boxes and chased voters away.

“We are miffed at the inability and failure of security agencies to intervene or try to stop hoodlums from perpetrating violence especially in the snatching of ballot boxes and disruption of the collation process at the polling units.

”The result of the election cannot be said to represent the aspirations of the genuine voters in the state and we, therefore, call for the cancellation of the results of the governorship election,” the coalition chairman said.

Also speaking, Deputy President, Campaign for Democracy (CD), Mr Obatungashe Isreal Adebayo, said the conduct of Kogi and Bayelsa governorship elections left much to be desired, saying both exercises were highly militarized and marked by malpractices.

This was just as he described as a disgrace to the election held on Bayelsa, calling for its outright cancellation.

”We are, therefore, calling for the cancellation of the election as the result did not reflect the wish of Bayelsans,” he said.