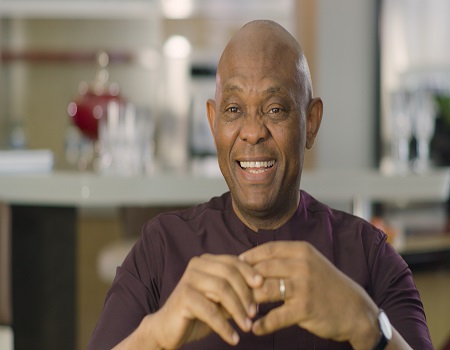 On this week’s African Voices Changemakers, CNN International meets Nigerian businessman and philanthropist Tony Elumelu. After years in the banking world, Elumelu is using his experience to help those eager to start their own businesses.

Elumelu made his fortune in banking, making his mark in the business world with the merger of the United Bank for Africa. This is just one of the companies in his portfolio. Elumelu also heads an investment company that holds major stakes in power, oil and gas, real estate, and healthcare.

This drive to see Africans succeed in all forms of business-led Elumelu to launch a bold initiative. He talks about this decision, “And I said okay, let’s commit an amount, let’s commit to a timeframe. And that’s how we came about 100 million dollars, for 10 years. A thousand entrepreneurs every year.”

This commitment was the premise behind what became the Tony Elumelu Foundation Entrepreneurship Programme which launched in 2015. It’s a fellowship that includes 12 weeks of training, mentoring, and $5000 of seed funding. To date, more than seven thousand aspiring entrepreneurs have gone through the programme.

CNN travelled with Elumelu to meet some of the entrepreneurs who have become successful after completing the foundation’s programme. One of the businessmen is Ndubuisi Eze who explains his initial business pitch, “I applied with just an idea of using drones to support crop dusting and also gather data on farms and that’s where the magic really started.”

After gaining access to the intra-African trade fair through the Elumelu Foundation, Eze was spotted by a Singaporean minister and now his drone company is up and running in Singapore.

The programme not only helped the business plan, but it also put us through how to evaluate customer acquisitions, and the business canvas helped you break down where you are going to get your resources.”

Eze now has plans to start his own training programme, and there are many others in a position to give back to their communities after going through Elumelu’s foundation. CNN meets Oduwa Agboneni, who grew her mechanic business thanks to the entrepreneurship programme.

She details how she employs local people for her growing business, “We have about twenty people working with us, five of them are interns because we also encourage interns from the university.”

The Tony Elumelu Foundation Entrepreneurship Forum is an annual event where participants of the entrepreneurship programme come together to network and engage with business influencers.

At the event, Elumelu speaks about the foundation’s future and successes, “We are committed to 10,000 Africans to go through the programme in 10 years. But this is just year five of the entrepreneurship programme and, you know what, we now have over 7,000 entrepreneurs.”

As part of the Entrepreneurship Forum, Elumelu was interviewed by CNN’s Fareed Zakaria.

Zakaria asked about Elumelu’s motivations behind the foundation. He explains his inspiration, “I believe the best legacy is the lives that we touch. We have the privilege to do so. It’s not just about my bank balances. I came to this world with nothing so it’s about what I worked so hard, I’m using it to help others.”

The Forum also provides Elumelu with an opportunity to address the aspiring entrepreneurs.

His message is a significant one, “The future of Africa is firmly and indeed in your hands.

The journey for the development and transformation of Africa, it cannot happen without you all.”