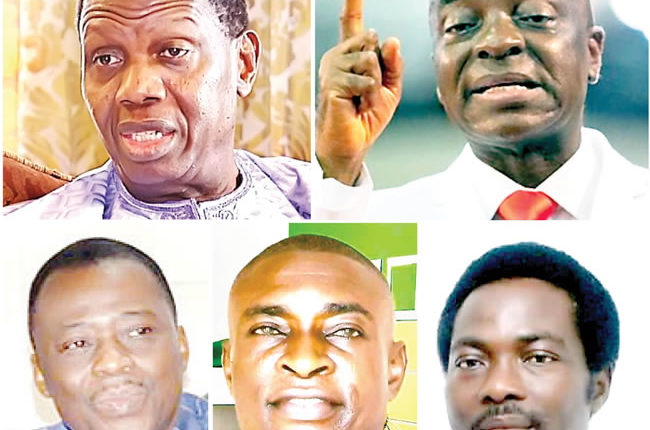 At the beginning of every year, it has become a norm for clerics across the country to reveal divine messages from God. These prophecies come in different dimensions and, sometimes, with dramatic connotations. SEYI SOKOYA chronicles some of the newly released prophecies by some church leaders.

FINALLY, the clock ticked to the first day of 2022 and the days have started rolling by. Usually, those things expected to make the year more interesting to look forward to include blessings and prophecies from church leaders.

These prophecies come in different dimensions. While some serve as caution for leaders of nations, politicians, government functionaries and public office holders, some are often directed at individuals.

Some of the church leaders who have made revelations concerning the year include the General Overseer of the Redeemed Christian Church of God (RCCG), Pastor Enoch Adeboye; the visionary of the Living Faith Church Worldwide (aka Winners’ Chapel International), Bishop David Oyedepo; the General Overseer of the Mountain of Fire and Miracle Ministries, Pastor (Dr) Daniel Olukoya; founder of Mount Gilgal Prayer Ministry, Pastor Sunday Nwolicha and Prophet Ola Abodurin of the El-Shaddai Covenant Apostolic Church, among others.

Pastor Adeboye in his prophecies for the year said more than 80 per cent of projects in 2022 will succeed and that it would be a year of the emergence of previously unknown stars. According to him: “In spite of everything happening, this year will be a year of some massive breakthroughs (in science and in finance). Infant mortality rate will drop by at least 50 per cent. The issue of migration will take a new turn in the new year. There will be two monstrous storms (one coming from the Atlantic and one from the Pacific) unless they are weakened, the results will be terrible.”

In his own message, Bishop Oyedepo, said 2022 will be a year of thanksgiving for every household and great difference in everyone’s lives!

“All your mockers will be alive to see the glory of God in your life. This year shall be the most robust spiritual year in your life. Prophetic Words will come to pass in your life without struggles. The Lord shall make a difference between you and the people of the world,” he added.

Olukoya in his prophecies said that corruption, evil plots, and schemes will be exposed massively, just as he noted that it will be a year of divine spectacle which shall bring better things for those who serve God wholeheartedly.

“It is a year that you have to be serious with God; sort yourself out and put your life right. Don’t play games with God in the year 2022. We need to pray hard to avoid useless wars; completely unnecessary wars. We need to pray seriously on strange and great movement in the waters, in the rain, in the river, and the sea.

“We need to pray as a church that God should begin to raise politicians like Daniel and Joseph who will prosper in whatever political and financial climates before them. We need to pray against inflation and starvation and massive political instability which will put a lot of people in disarray.

To the cleric, corruption and evil schemes will be exposed in the New Year, while noting that it is a year for the saints to shine as light.

“Corruption, evil plots and schemes will be exposed massively. Many prodigals will come back to the Lord, willingly or unwillingly. The Lord says that for many, all the doors that were shut against them shall be forced open.

“It will be a year of drought for those without storehouses. All over the world, hard-core occultic (people) and ritualizes will be put to open shame,” he added.

Pastor Nwolicha, 2022 is not a joke, but a terrifying year. He noted that it will be a bloody and lawless year as well as a year of crises which will lead to lamentation and regrets by Nigerians over poor and bad leadership as a result of serious hunger, severe hardship, difficulty, and suffering in the land.

“Prices of food will be high and expensive without control. The price of gas will continue to rise if nothing urgent is done as crisis over petroleum pump price will remain a problem and controversial. There will be high cases of mental and emotional depression which may lead to suicide and psychiatric cases or mental illness as a result of hardship and traumatic condition of the country.

“Many Nigerians will go borrowing and be heavily indebted. Armed robbery and ritual killings will be the order of the day. Banditry, herdsmen attacks and kidnapping will rage and give Nigerians sleepless nights like never before. May God protect His own.It is a year that will be marred with mass protests; a year Nigerians will openly lay curse on the government during protests?A year of youth restiveness.

“There will be cases of political and personally-motivated bloody killings in the country as never before. There will be regional and communal crises in parts of the county. The people of Edo North from Owan Local Government to Auchi, Igarra and the northern axis of Edo must be prayerful also against communal crises or against death by epidemic and Fulani herdsmen problems.

“I see many Christians in the North contesting for political offices. There will be a lot of manipulations by northern groups to remain in power or hold on to power. 2023 elections will be marred by electoral frauds, bribery and voting by the under-aged (children precisely). If democracy is not scuttled in Nigeria, I still see the next governor of Edo State coming from Esan (The Ishan) part of the state, who will perform in the spirit of Ambrose Alli after, the reign of Godwin Obaseki.

“Except Bola AhmedTinubu prays and watches, he would play into the hands of scammers and fraudsters as many around him are waiting to scam and defraud him. He will shock his political opponents, break grounds in the North and almost make his way to Aso Rock if he contests, but will meet with a strong brick wall that would crash his dream and entire political career and APC will be no more relevant,” he added.

Nwolicha also revealed that 2022 would be a year of health challenges for Nigerians and the world generally, adding that, “There will be increased cases of cancer both in males and females. Depression, psychiatric cases (with mental illness and emotional stresses) for Nigerians will occur.

“Most ministers of the Gospel must be ready for new assignments as many will be redeployed into evangelism, for end time ministration and the second coming of our Lord Jesus. The Lord will be recruiting new ministers mainly into the field of evangelism from this year, from all over the world to tell and preach about His second coming and His judgment.

“The Eternal Sacred order of Cherubim and Seraphim and the Celestial Church of Christ must pray to avert death of very important personalities in their churches this year as many will go in the way of death. There will be a show of shame in one of the big and famous churches that will lead to the disgrace of the founder of that church. May God have mercy on us,” he added.

Prophet Ola Abodurin in his own 2022 prophecies revealed that God will expose hidden secrets within the Nigerian security agencies that will liberate the armed forces of the country.

He also noted that God revealed to him that the frustrating years of the ruling party of the country is over as the Lord is ready to fish out every element that is frustrating the result of their hard works. Bola Tinubu, if he could step down and support Yemi Osinbajo for presidency, their works will definitely show and become apparent.

Abodurin also hinted that God said that Nigerians should not be afraid, and that He will take control of the bandits and kidnappers this year, adding that, “God said the country’s leaders should pray hard against sudden death between May and August. He will raise three powerful men of God in Nigeria that would be known in the whole world like late Evangelist Reinhard Bonnke. Nigerians should also pray against sudden death among men of God between second quarter and third quarter.

“There would be a new disease and it will affect some countries but some countries will not be affected and four presidents might die before the end of the year. Nigerians should also pray against plane crash between June and September. God said he has heard our prayers in Nigeria and that within seven years, the nation will begin to flourish again because many bad leaders will go before then and He will raise uncommon men,” he said.

We want to go back home, not happy here

If 1995 constitutional conference reports had been signed into law, Nigeria won’t be in current mess —Ofonagoro

Some GOs not qualified to be church workers —Edokpayi

With prayers, Nigeria can overcome its challenges — Oladapo Moses