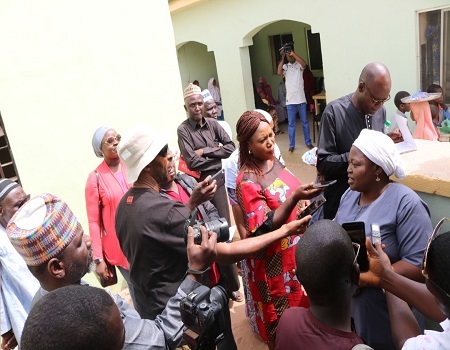 Some of the beneficiaries of the CBS services provided by Bauchi State Primary Health Care Development Agency with support from the Challenge Initiative, TCI and Development Communication Network, DEVCOMS in Alkaleri Local Government Area of Bauchi State, commended the state government for working with development partners to improve maternal and child health.

The beneficiaries who are mostly rural women gave the commendation during a recent visit to Gwaram Primary HealthCare Center in Alkaleri local government area by members of Bauchi Public Health Media Network describing the child spacing services as life-saving.

All of those who spoke maintained that since the introduction of CBS in the state, the lives of families have improved urging the state government to continue to strengthen partnership with NGOs and extend the services to reach more women with the needed awareness and services to save more lives and improve their quality of life.

A mother of three who was carrying a fourth pregnancy who is one of the beneficiaries said that the Child spacing services had led to the increase in the number of women visiting the health facility in the community.

She said, ” I am supposed to have four children but one which is the only boy died when he was one year old. I have benefited immensely from this intervention because I spaced all my three children. The first one is eight years, the second one is five years, the last child is three years while I am now carrying the fourth pregnancy”

Another beneficiary, mother of six children and expecting the seventh, advocated for more sensitization activities on Child spacing services in rural communities, especially where early marriage is of high priority.

“I married at the age of 15 and was opportune to get enlightened about Child spacing services early, so I spaced my children with the space of three to five years interval. My children are healthy because I embraced childbirth spacing early”, she said.

The In-charge of the Gwaram Health facility, Mrs Grace Magani, said that the turnout for the Child Spacing Services by residents of the community have been encouraging compared to the past where they were only a few clients that came to the facility for such services.

TCI which is supporting the government to implement Family planning and Child Spacing services is a non-governmental organization active in 10 states of the country including Bauchi State and is led the John’s Hopkins Center for Communication Program with funding by the Bill and Melinda Gates Foundation with the goal of increasing the capability of the state government to provide life-saving reproductive health, childbirth spacing information and services to families and services to families and Communities.