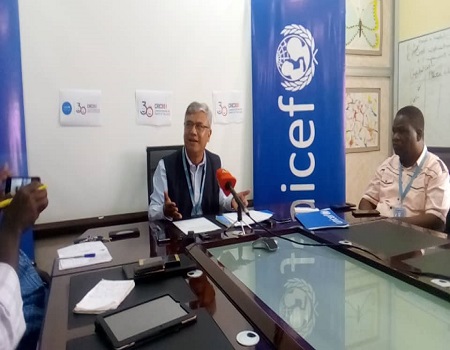 While lamenting that eleven states out of the nineteen Northern States are yet to domesticate the Child Rights Act (CRA) the United Nations Children’s Fund, (UNICEF) has appealed to the affected states to as a matter of necessity, domesticate the Act in order to provide a legal framework for the protection of the rights of children.

Chief of UNICEF Field Office in Bauchi, Bhanu Pathak while addressing Journalists on Wednesday  to commemorate the 30th Anniversary of the Convention on the Rights of the Child (CRC) and the World  Children’s Day, said that domestication of the Act is the only legal framework needed for protection of the rights of children in the country.

The UNICEF chief who listed Bauchi, Adamawa, Gombe and Jigawa among the eleven states that are yet to ratify the Child Rights Act in the North, noted that it is difficult to defend the rights of children without an enabling laws that will give legal backing to anything to be done for the children in terms of rights protection.

Bhanu Pathak said, “Ratifying child rights law in the remaining eleven northern states will help to put in place policies and initiatives for the protection of the child. It’s difficult to operate without law, and it’s difficult to prosecute violators of children’s rights if there’s no legal framework”.

He added that “In Nigeria, only 25 states have enacted the law so far. The states which are yet to domesticate the Child Rights Act are from the northern part of Nigeria. I call on all these states to domesticate the Nigeria Child Rights Law to provide a legal framework for the protection of the rights of children in their respective states.”

Bhanu Pathak further said that as part of activities marking the 30th anniversary of the Convention on the Rights of the Child (CRC), various iconic structures across the country will be lit blue, including the Emir of Bauchi’s palace.

Advocacy group sues Buhari, others over tenure elongation for Perm-Secs