Arts and Culture
By Akintayo Abodunrin On Aug 30, 2020 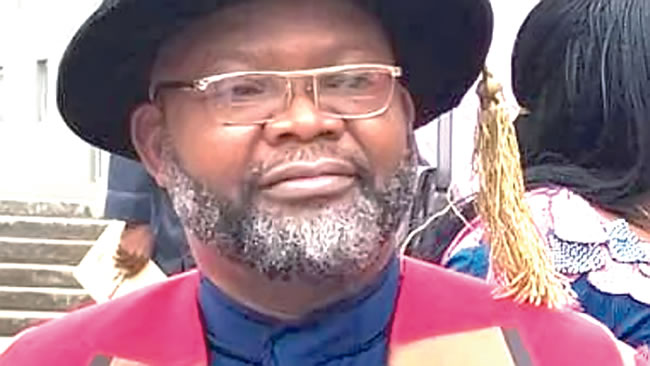 Wednesday’s appointment of a tested dramatist, Professor Sunday Ododo as General Manager of the National Theatre is generating a buzz.

THE appointment of Professor Sunday Enessi Ododo as the General Manager of the National Theatre has, expectedly, been received with cautious optimism in the cultural community.

The reason is not to seek: he has a rich pedigree in theatre both as a scholar and artist. Some commentators describe the Professor of Performance Aesthetics and Theatre Technology in the Department of Visual and Performing Arts, University of Maiduguri, as a ‘scholar artist’.

Ododo, who attended the Universities of Ilorin and Ibadan, where he gained his B.A, M.A and PhD, in Performing and Theatre Arts between 1986 and 2004, is a former president of the Society of Nigeria Theatre Artists (SONTA).

But his professional affiliations aside, the man credited with inventing the Facekuerade Theory, is an accomplished academic and intellectual. He hasn’t relented since starting his academic career in 1993. He has left golden footprints at the University of Ilorin and University of Maiduguri where he was until President Muhammadu Buhari appointed him GM of the National Theatre on Wednesday.

His Facekuerade, which has contributed to the global measure of performance aesthetics and theatre technology, is a theory and a form of theatre, a four in one quintessence. He came by it through studying traditional festivals.

While there were raised eyebrows over some of the eight other appointments made for agencies under the Ministry of Information and Culture because of their unknown pedigree, commentators were unanimous about Ododo’s choice. They said that the appointment of the scholar, screenwriter, actor, poet and technical theatre practitioner was spot on.

Artist and former chairman, NANTAP, Mufu Onifade said: “Though a scholar, Prof. Sunnie Ododo is also a thespian who is grounded in the practice, management and administration of theatre. His appointment as the new General Manager/CEO of the National Theatre is an untainted example of a round peg in a round hole. I worked directly with him in 2010 when I was Chairman of the National Association of Nigerian Theatre Arts Practitioners. I saw in him a hardworking man and thoroughbred professional who would not give in to pressure.

“Indeed, Sunnie Ododo has an excellent character and personality; he is affable and amiable. Those character traits make him a good manager of human resources. He knows that the stakeholders in the theatre industry will look up to him for meaningful development of the industry, especially from the stable of government. I do not doubt that he will bring all these attributes and qualities to bear in his new calling as GM of the National Theatre.”

Artist and founder of the Crown Troupe of Africa, Segun Adefila was of the same view. He said, “Most people I know in the arts community were jubilant at the mention of his name when the announcement got to us. A lot of confidence is reposed in Professor Sunny Ododo. You know that kind of round peg in a round hole kind of relief and confidence. We believe our hopes will not be dashed. I expect him to live up to his good reputation. As they say it, the ball is back in our court; it’s time to prove our mettle. The programming that will emerge from the National Theatre should be that type that would turn the famous Abe Igi to a place where post artistic experiences are discussed after a good feast of theatre and/or other artistic engagements. The National Theatre should have as much as, if not even more patronage than Abe Igi.”

Media entrepreneur and film producer, Fidelis Duker didn’t differ from the others. He also hailed Ododo’s appointment, saying that it is “obviously a welcome development considering that the respected Prof is not only a practising thespian but a teacher. It is instructive to say we will like to see how he will marry the interest of practitioners and the recent concession of the National Theatre to the Bankers’ Committee. It is one important area most of us will be waiting to hear how the marriage will work. However, I am not in doubt Prof Ododo will perform. I can only wish him a very successful tenure.”