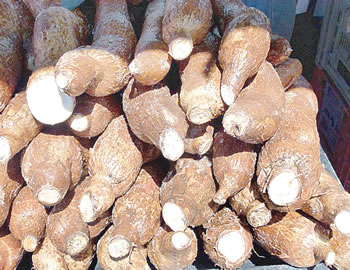 The record of Africa being the largest producer of cassava is now threatened.

Speaking at a training programme for tractor operators, extension agents and agriculture officers In Ilorin at the weekend, the regional representative, West Africa, African Agricultural Technology Foundation (AATF), Dr Abdourhammane Kollo, said that continuous lowest yields of cassava in some cassava growing nations of Africa may confine the continent to a poor status if new approach is not promptly embraced.

Kollo, who spoke at the National Centre for Agricultural Mechanisation (NCAM) in Ilorin, however, said that the trajectory of the continent being the largest producer of the tuber crop yet with the lowest yields could be averted if better technology was introduced.

“Africa accounts for nearly 55 per cent of cassava growing annually which makes it the largest producer of cassava in the world, however, Africa’s yields are the lowest in the world standing at 10-12 tons per hectare.

“Low productivity is as a result of poor farming tools, near absence of mechanisation and limited market opportunities. It takes an average of 8-10 days for an African farmer to harvest a hectare of cassava compared to an Asian farmer who harvests same farm size in six hours,” he said.

The AATF official, while charging trainees drawn from four Nigerian states of Kogi, Kwara, Ogun and Oyo, said cassava has an enormous potential as a food security crop and also a major contributor at improving the livelihood of rural resource poor farmers within the continent.

How CBN funded first sorbitol factory in Nigeria, Africa and second in the world